Im happy with my bracket selections as I have all the qrt finalists but Del Potro,
With Hewitt being the surprise and playing so well he plays Roddick next. Ive put Roddick in the semi but as with Queens this could be very close. Im still going with Rod but if Leyon gets on a role like he ha done this tournament then who knows.
Murray yesterday didnt play too well and scraped thro but he will have it easy with Ferrero. As with Queens the… Continue

How much does string really matter to you??

All of these new "big banger" strings are coming out like the new "Black Code" from technifibre, "Hurricane" Babolat, "MSV" Focus, "Zo twist tour", "Zo Rough"...etc.

What about string like "Natural Gut" though and Excel premium from babolat, wilson "hollow core", Wilson "stamina", all these multifilament strings!..

Adidas Barricades - The New Summer Line Is Here... and Hot

The new kicks are in, and looking better than ever.

These shoes are great, when i first looked at these shoes i was hooked.

From the style to the playability these shoes top the… Continue

History likely to repeat itself at Wimbledon 2009

The most prestigious and historic Grand Slam event of the year starts in less than 24-hours and a lot is at stakes with Federer standing on the brink of history and Murray attempting to become the first Briton since the great Fred Perry to win a native Grand Slam event. Will Venus win another title at the slick lawns of the All England Lawn Tennis Club?
Find out with us as we… Continue 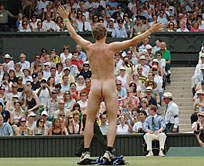 Come show us your stuff! errrr.....I mean show us your tennis knowledge in the second annual Wimbledon Bracket Challenge. Correctly pick the winners in the men's matches and win... the right to brag for an entire year.

Get entered in our next pick-em contest here at Tennisopolis. Show your knowledge and predict the winners of Wimbledon 2009, or just have a fun time…

Nadal CAN NOT Repeat as Wimbledon Champ.

It can't happen and it won't happen. Nadal's legs are breaking down and he simply needs a rest. If he can't dominate on the red clay of Paris, there is no way he can win 7 straight on the green grass of Wimbledon. Besides, he just lost to Leyton Hewitt! 6-4,6-3. Uncle Tony thinks Rafa should hop on a plane and head back home. i.e SKIP WIMBLEDON. Exact quote: "If… Continue

It's that time again. This league season is a bit of a change for me, as I am now playing in the AM instead of the PM. Why? By mid July, at 6pm, it will be sunny and over 100° outside, and that is just a bit too hot for my blood. The evening league ended up canceling anyway, probably because a lot of people had the same temperature factor in mind that I did.

Before my first league, I had a little practice with another gal the night before. I broke my two main goals in tennis - not… Continue

One Minute To Better Tennis

What can you do in one minute to improve your tennis game? Depending on what's happening on your court, here are a few things that might turn things around for you during a match that take less than a minute to do.

1. Are you losing? Take a minute to get more aggressive. It never pays off to get less aggressive. If you're losing, you've probably… Continue

Is Your Game Only As Good As Your Serve?

Last night, I had a "blind tennis date" with an awesome gal I found on Craigslist. We had a good time - warmed up for about 40 minutes then played two sets. I did pretty good at 6-0 and 6-3, which gives me a boost of confidence going into my league next week.

What was different about playing those two sets compared to my last league match over a month ago? It was one thing - my serve. After my coaching lesson and some great tips from my husband, I finally got my serve pretty… Continue

All I can say is was I right or was I right? Roger Federer just made history by winning the French Open as I knew he would. He played superbly - served well and Soderling did not have the game he used against Nadal. I was surprised by how well he spoke at the trophy ceremony because I have heard a lot of negative things about Soderling in that he does not have a lot of friends on the tour and that he isn't the nicest guy. However I felt he was very gracious in defeat and displayed a great… Continue 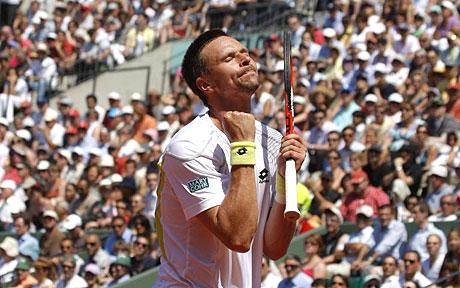 Soderling has done it again.

To many, this is probably one of the most improbable runs at a Grand Slam in recent memory. While he certainly isn’t the lowest ranked player to get this far, Robin Soderling has never made it past the 3rd round of any major, ever! The guy has not even won a clay event in his life...And here in France, Soderling has not only made it to the finals, he defeated arguably the greatest clay court player of all time, in what was one of the… Continue

For the most part of my life, I have not been a physical learner. I played softball for about 10 minutes when I was in elementary school, up until the point I took a ball to the mouth. I played volleyball a bit in junior high, but nothing super competitive. And I took a tennis course in college, almost a decade ago, and spent most of the class time running laps, because that was our instructor's solution for fixing students when they did things incorrectly, like popping the ball out of the… Continue

I just had to write to say I cannot believe Nadal is out of the French Open. Soderling played the best tennis of his life no doubt, but Nadal was not playing well at all. It was strange to see Nadal constantly on the defense and Soderling was serving phenomenally. A huge upset to say the least and I guess this pretty much paves the way for Federer to win the French.