Roger Federer: Spirit of a Champion

If you are a Roger Federer fan like I am, you will love this documentary my hubby found on Youtube. It's three parts in nine videos. I have put them all in a playlist so you can watch one right after another.

Check out Roger Federer: Spirit of a Champion.

It's Just a Little Dirt

So last week, I'm reading through the "tweets" I receive on Twitter and I notice one from Jon Werthiem, Sports Illustrated's tennis guru. He posted an item about something going on that I didn't even notice: No U.S. men were in the singles draw at the Monte Carlo event! That's amazing, but here's something that's pretty wild, too: There's none in the singles draw in Barcelona this week either!

And then, get this: Two out of three of the Challenger events this week are being played on… Continue

Twitter is the social network which asks its members to answer the famous question “What are you doing?” in 140 characters or less. It's like Facebook, minus the photo albums, applications, groups, pages, etc. It's a very simple way to connect with friends, make new ones, or just follow your favorite celebs / athletes.

Bad news for Goran Ivanisevic fans out there. The former Wimbledon champion from Croatia was forced to pull out of this week’s Legends Championships Tennis Tournament at the Ritz-Carlton in Grand Cayman due to a lingering knee injury.

“I am very disappointed not to be able to play in the Cayman Islands due to the longer than expected recovery time necessary after my knee operation,” Ivanisevic said.

“I was looking forward playing in a first-class event on a dream island. I… Continue

I'm a bit of a literary person, but have been surprised to learn that quite a few of this type have been or are very good tennis players. Richard Wilbur, e.g., the former poet laureate of the U.S. is quick to describe the old image of the centipede getting his legs all twisted up from self-consciousness. Thousands of people always want to ask him how to write a sonnet. In his prose pieces he compared this to the drop-shot. Yes there are a bunch of parts to both, but if you just focus on the… Continue

The AGONY and ECSTASY of Roger Federer

The future champion's rise is talked as much as is discussed the current champion's downfall. Roger Federer's string of losses to in-form youngsters is the talk of the town. From bursting into tears in Melbourne Park to racquet slamming in Miami, the man is in serious need of a rejuvenation....!

Napoleon Bonaparte once quoted - "My downfall raises me to infinite heights". Perhaps he wanted someone in the modern tennis world to draw inspiration from that thought. And… Continue

On July 6, 1986, a family in a little town of Germany welcomed a baby girl into their small world. This 'welcome', however was with a little twist of fate. The biological condition of the baby did not confirm with the stereotypical traits of any new born. It was… Continue

People Magazine confirmed through a reliable source that 26-year old American tennis superstar Andy Roddick and 21-year old Sports Illustrated swimsuit model Brooklyn Decker will tie the knot this weekend in Austin, Texas - where the world no. 6 is based.

The source also revealed that prenuptial festivities have already taken place, including a bachelorette party for Decker and her bridesmaids which took place last weekend in the model’s native North Carolina.

Among ATP World Tour players, world number three Serbian Novak Djokovic has the best percentage when it comes to challenging calls which require the Hawkeye video replay system. Not sure if this distinction is something to be proud of, Djokovic humbly said during the Sony Ericsson Open in Miami that it doesn’t necessarily mean that he has the eye of a “falcon or something.” 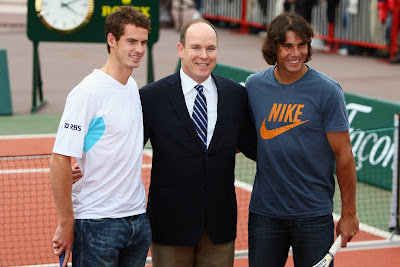 What can I say? I've really been into "American Idol" this season!

Anyway, the clay-court season—the real one, not the teaser Latin American one earlier this year—kicked off this week and already there's been some pretty interesting happenings.

I guess the biggest thing is Serena Williams losing today to Klara Zakopalova (huh? who?) in the first round in Marbella, Spain. And not only did she lose the match, she also lost the number-one ranking to Dinara Safina, who'll take… Continue

Did anyone get a chance to see the Dubai tournament this weekend? I hope I'm not alone in saying that I
enjoy watching these guys play, just as much as the regular tour. To see Stefan Edberg, one of my all
time favorites, was so cool. I really hope he continues to play, so we can see Mcenroe vs Edberg again!

VIDEO VAULT: What did Wilson ever do to you Fed?


Roger Federer may want to retire his denial dance once and for all this season.

The 13-time Grand Slammer was all out of sorts (to say the least) and was bounced from the Sony Ericsson Open today by Novak Djokovic 3-6, 6-2, 6-3. The Serb will… Continue

This season is definitely starting off on a roll. Last night, I won my second match at 6-2, 6-0. I still missed a lot more than I should have with unforced errors, but I got it under control a lot sooner this time than last. And only two double faults, which is a miracle in itself, considering I just changed my grip on my serve this past weekend. Now I'm serving with the appropriate grip, doing a bit more pronation, and hitting the ball above my head instead of low and out in front of me. All… Continue