This is a necessary skill if you're attacking the net


another secret sakuma drill that I'm releasing to improve your… 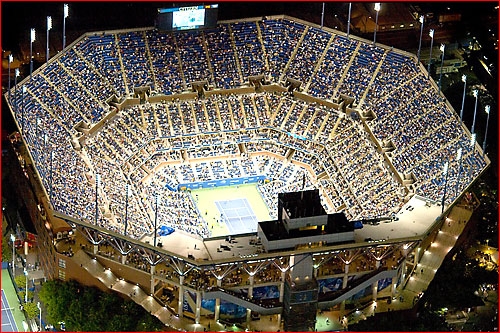 Looks like we'll need to be changing out the first image on the Main page. We've been boasting that we have enough members in Tennisopolis to fill Centre Court (at Wimbledon of course) which can fit about 15,000 fans. But in a few weeks we'll surpass the capacity of the largest tennis stadium in the world, Arthur Ashe. Ashe can hold 23,200 fans. Right now, Tennisopolis just broke through the 22,000… Continue

So it’s OK for Federer to cuss the umpire?

I have to tell you that I enjoyed every moment of Federer’s angry outburst during the third set of his match against Juan Martin Del Potro. It could not have been better timed. Really, I was so thrilled to see it that it didn’t bother me for a second that Federer got so rattled that he went on to lose the match. Sure I wanted him to win 16 Slams, but it’s OK with me that he… Continue

Women's Tennis at the U.S. Open

First off I think it's amazing how quickly the majority of the seeded players were defeated in this year's U.S. Open. Clijsters has made an amazing comeback after being off the tour for 27 weeks now finds herself in the final. She played great in her semifinal match against Serena Williams although her play was greatly overshadowed by Serena's unsportsmanlike conduct. I was really surprised to see her lose her cool as she did during this match. Getting back to comebacks I personally find it… Continue

I just saw Del Potro defeat Nadal in the U.S. Open semis. Del Potro played amazingly, but it was disappointing to see Nadal so easily defeated. I don't think Nadal has been at his best since having had to take time off due to injuries. Del Potro made it look easy which was unbelievable. Del Potro is playing unbelievably - serving great and absolutely lethal off both wings. The final is going to be a really intense match up. Stay tuned!

You can take the woman out of Compton

You know the expression. I don’t have to complete it for you. And it will be one of the ways in which the manner in which Serena Williams lost the 2009 US Open semi-finals will always be understood. Some will say that Serena behaved like a thug when she raised her racket in a threatening manner towards the diminutive Asian lineswoman and was possibly overheard… Continue

Heading into this U.S. Open, did you think?:

• Kim Clijsters would be in the semis?

• Melanie Oudin would be playing in the quarters?

• No U.S. male would make the quarterfinals for the first time EVER?

• Andy Murray would lose so early, seeing as how it seemed he was destined to get to the finals?

• Roger Federer would almost be under the radar with all the other stuff surrounding the fields on both sides?

• Rafa Nadal would be… Continue

That is all. Go to www.twitter.com/prince_tennis follow us and provide your reason.

SERENA VS VENUS: Who's the all time best female player?...... idiotblvd.com

idiotblvd.com has SERENA VS VENUS who is the all time best female tennis player?

Serena Williams domination in women's tennis over the past decade has left players and tennis pundits wondering if she has a secret formula for success.

There is a little bit of emotional element to Williams' victories in the past decade. Her sentimental meltdown after the 2003 Roland.................

What's with all these women coming back?

First it was Kim Clijsters. Then I heard talk about Mary Pierce who is reportedly in serious training with Yutaka Nakamura at Bollettieri’s. And now rumor is that Henin is training for some exhibition matches later this year and may be open to returning to competing for real. What’s going on? What’s with all this leaving and coming back?

Personally I blame Dinara. Yes I know that it’s not fair of me to lay blame anywhere but since you logged on to this blog to get my opinion I will… Continue