Rarely does Djokovic whisper as he does here to his charming compatriot and Hopman Cup doubles partner, Jelena Jankovic. Generally, the ATP’s most engaging superstar proclaims his sentiments to the world in unambiguous fashion. Typical of this trait was the bravado with which he addressed his Friday confrontation againt Verdasco, who inflicted Djokovic’s worst defeat as a top-10 player two weeks…

The Problems With Roger

I really do believe, that if you look back through over the years, you will see that tennis players who recently got married, or had children, then their game took a dip.

Lleyton Hewitt was a classic example.Your life changes, and if you are a pro sportsperson then it changes even more.

I really believe that his values will have changed a little, but he will be back, and I think Wimbledon will be his time.

I hope so, because to see him lose like…

Fed Cup: It's like the 1980 Winter Olympics all over again!

Back then, the U.S. beat Russia in hockey in the famous "Miracle on Ice" game. Thirty years later, there's a new parallel to that with the U.S. Fed Cup team beating heavily favored Russia to advance to the finals of the competition.

On paper, the U.S. should've been hard-pressed to win one rubber, much less the whole tie. But I have to tell you, the job Mary Joe Fernandez has been doing the past two years is nothing… Continue

Really interested in getting started again! Its been years since I've played. Anyone with a little bit of patience . . ? I can meet most anywhere evenings and weekends. -Ciao

Hooking up and splitting up, in doubles

A doubles partnership is very much like a marriage. Some people enter it at a whim, not really expecting anything to come from it. In such cases, usually nothing does. The players involved may enjoy a win or three, but once they get past the infatuation phase, they discover that they really don’t have what it takes to last. And they split.… Continue

There's only one tournament on the ATP calendar this week, the event in Barcelona. Rafael Nadal was the top seed, but withdrew before the tournament started. Not that it really matters to him, but that's fine with me: Approaching his schedule with some caution is a good move.

I have to admit, I am anxious to see what he does his next time out after watching him completely and utterly destroy the field in Monte Carlo. Every scoreline, even the finals against countryman Fernando… Continue

Author, Steven White brings twenty-five years of tennis teaching experience to focus on the fundamentals of the game for the young, the beginning, and the improving player. The book allows young readers to learn the basic strokes of tennis from easy-to-follow text, written with a combination of simple and more complex sentences and carefully introducing new vocabulary. And it's Manga illustrated! The Manga characters not only provide an interesting…

Tsonga & Gasquet: A Changing of the Guard in Monte Carlo? 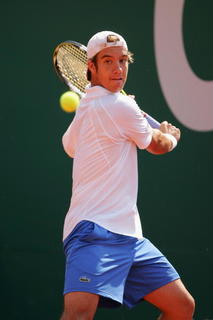 With the start of the clay court season, talk always focuses on the many Spanish players in the top 30 of the ATP tour, each of which has a good chance of doing well in the coming months. Less noticed, but by no means should they be overlooked, are the growing number of French players in the top ranks as well. During today's early round action at the Rolex Monte-Carlo Masters, a possible shift in the French guard may have been cemented as Jo-Wilfried…

So I play a particular gamestyle in tennis and can categorize myself as a agressive counterpuncher. I've been told that I'm a retriever and counterpuncher also so for now i guess that's who i am as a tennis player. However, this doesn't mean i have to play this style all the time cause sometimes it doesn't work so I'll have to change up my game plan. I played a match within my usta team and although it's suppose to be "friendly" I feel that my opponent (who is my teammate) still wanted to play… Continue

It’s always a pleasure to contemplate Henin’s exquisite all-court game, especially on the surface where she has won four of her seven majors. Although the petite Belgian hasn’t played on clay since Berlin 2008 and claims to be have… 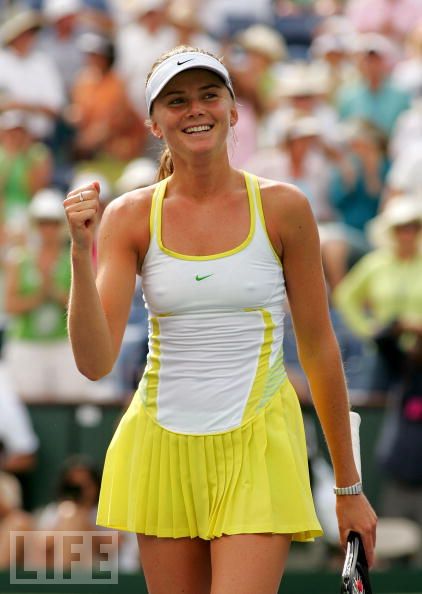 Twice the queen of Indian Wells, Daniela Hantuchova startled us on Friday by intercepting second-seeded Jankovic’s seemingly tranquil trajectory towards the Charleston final. It was a pleasant surprise, though, for we’ve always enjoyed watching the cultured, multilingual Slovak and have sympathized with her struggles to master her nerves at crucial moments, most notably the 2008 Australian Open semifinal against Ivanovic. Since we’re straddling the…

Competition or Surface: What's the Best Way to Prepare for the French Open?

Fresh off winning her first title of the year last weekend in Ponte Vedre Beach, Florida, Caroline Wozniacki is keeping it rolling this week at the Family Circle Cup in Charleston. She has to be the heavy favorite to win the title with the form she's been displaying.

Meanwhile, elsewhere on the WTA calendar, Francesca Schiavone and Roberta Vinci have advanced to the finals in Barcelona, a good result for both players.

But I'm left wondering something related to both of these… Continue 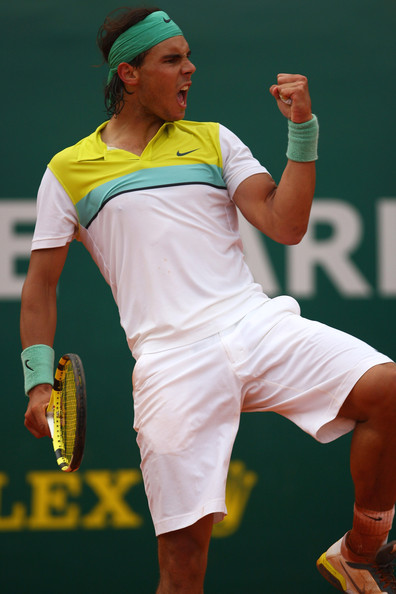 The five-time defending champion was ruthlessly efficient again today, conceding just one game to an outgunned opponent for the second straight match. After a successful day of predictions on Thursday, all four of our projected semifinalists remain in contention for the first significant prize of the ATP clay season. But will they take the final step into precisely the Saturday matchups that we envisioned several days ago? Let's break down the…

Why I'm Not Worried About Rafael Nadal

The Monte Carlo Masters event has gotten well under way and a lot of the big names have been in action. Novak Djokovic blasted Florent Serra off the court and Andy Murray in turn got blasted off the court by Phillipp Kohlschreiber.

And the five-time defending champion Rafael Nadal? He demolished Thiemo de Bakker 6-1, 6-0 in an hour. Sure, de Bakker had to get into the tournament as a qualifier, but that can be a good thing sometimes because it means you've gotten some matches under… Continue

The Best of the Rest? WTA Charleston Preview 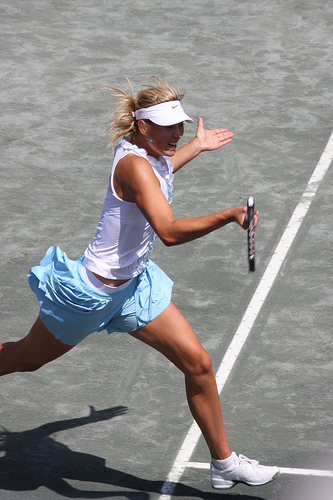 One could argue that currently there are five real marquee names in the WTA; two are sisters, two are Belgians, and the fifth is mauling a hapless tennis ball above. As it happens, none of the five are participating in Charleston this week (although two were originally entered). While tournament organizers and sponsors may rue their absence, the players in the draw should relish the opportunity to seize a prize of some consequence without conquering…

This Is My Brain on Drugs

Before I turn my thoughts to the Monte Carlo Masters, I just thought I'd do a little reflecting on the U.S. Clay Court Championships in Houston, which ended with Sam Querrey falling in the finals to Juan Ignacio Chela.

Probably the biggest news of the event was Wayne Odesnik showing up there and advancing to the semifinals, despite the threat of what some might call (myself included) a well-deserved suspension for pleading guilty to smuggling human growth hormone into Australia at the… Continue

The Return of the Rafa? ATP Monte Carlo Preview 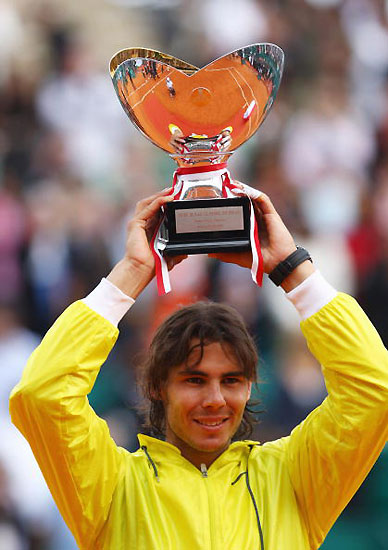 Doubtless energized by a return to the clay, Nadal pursues a record-breaking sixth consecutive Monte Carlo title and his first title in nearly a year. The draw includes only five of the ATP top ten and lacks not only Federer but past Rafa-killers Del Potro, Davydenko, and Soderling. In the depleted field, can anyone derail Nadal’s return to the winner’s circle? Quarter-by-quarter preview straight ahead… 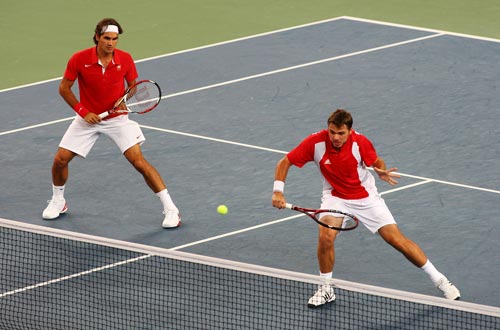 Almost unnoticed except by the sport’s most fervent followers, four tournaments came and went this week even while most of us recharged our batteries after the drama in Indian Wells and Miami. Scraping off the rust that accumulated during an extended paternity leave, Stanislas Wawrinka claimed the not very Grand Prix Hassan II in Casablanca, which provided an opportunity for the Olympics gold medallist (see above) to…

DESIGNER LEOPARD PRINT TENNIS BALLS... by Sequen! Play To Be Seen! AS SEEN IN TENNIS MAGAZINE! 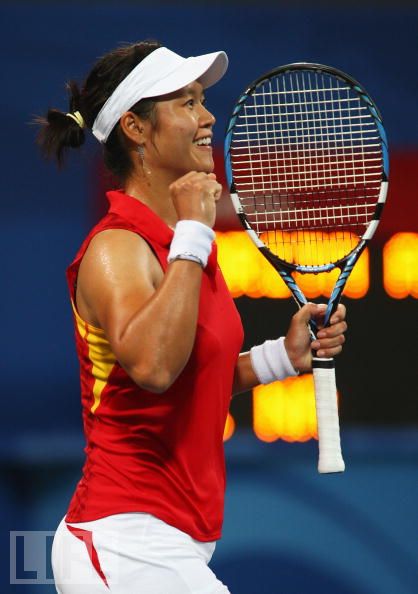 Pressure may have been a privilege for Billie Jean King, but for China’s Li Na it is an inescapable fact of life. Long burdened with the towering expectations of her compatriots, Li nevertheless has brilliantly represented Chinese tennis on the biggest stages in the sport. Not just personal achivements, her successes have proved vital in sparking a wave of talented compatriots to follow in her footsteps–an influence that few players can…