Looks like. I am recovered from my back problem although I still do many core workouts to keep extra fit. Playing again with no pain. Life is good again. I could not imagine never hitting a tennis ball again. I do prefer clay though as it is less demanding on your back and body overall. Or is it? Since the points last longer, less winners you are hitting more balls. So, you start getting tennis elbow or tendinitis there.Ugghhh. Just keep lifting some weights and exercise to keep playing.…

I am a 3.5-4.0 player living in Fairfax, VA.  I am looking to find players to hit or play with in Northern Virginia, preferably Fairfax.  I am interested in men or women and singles or doubles, any skill level but beginner.  I am flexible and can play during the week and on weekends.  You can email me directly at danielle144@gmail.com

Over the weekend, we had the McKinney Tennis Center's One Year Anniversary. It was a lot of fun. A bounce-house for the kids, face-painting, games, free food, live-music, raffles, etc. Lots of fun. The only bad thing was the rain. Not cool. I stuck around for the Fast-Serve competition. I was in the finalists with a 93 mph serve. Not bad for wet-flat balls! I bet I could have done better, but it was cold and nasty outside and we didn't…

Looking for a hitting partner in Fremont/Union City/Milpitas - NTRP 3.5+. I can play 5+ as well. Please let me know if anyone is interested in playing for fun or serious tennis. I can hit regularly any weekday evenings or weekends.

On this edition of This Week in Tennis the stars of the ATP and WTA Tours are shining brightly in Miami…..please join Craig Doyle and Phil Naessens as they take a closer look at what’s happening at the Sony Ericsson Open as well as a look… 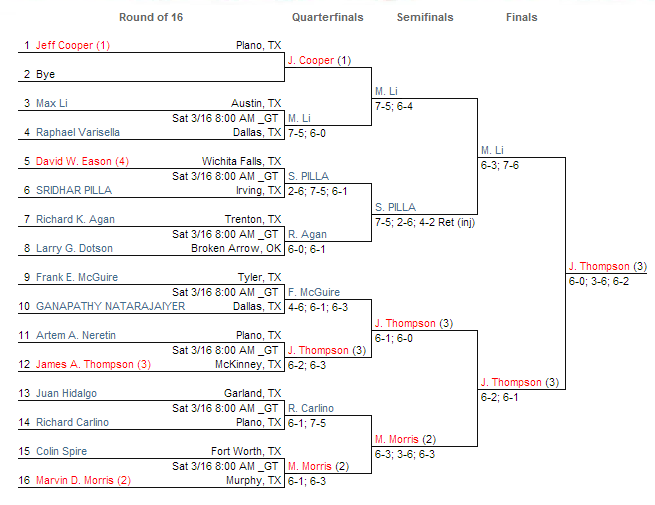 This Week in Tennis 3-16-2013: Indian Wells; The Tennis Pushers Paradise

On this edition of This Week in Tennis Craig Doyle and host Phil Naessens discuss the slow high bouncing courts at BNP Paribus Open being held at Indian Wells, whether or not the rivalry between Roger Federer and Rafael Nadal is still entertaining as well as their thoughts regarding what has occured this past two weeks and their predictions for the Men's semi-finals…

this sunday morning 17th march, anytime in the morning is fine.

Hello I live in S. Jersey close to Philly.  I can either play in either area and am flexible but can only do weekends if weather is nice.  Either male or female.  I am open to doubles too.  I am new to this site and don't really use it but with spring around the corner I am definitely into playing some more for fun and exercise.  If interested e mail me back or call me at 856-383-6683

In case you don't know, there are two websites (that I'm aware of, there may be more), where you can watch almost all of the big tournaments online for free.  However, there is a catch.  You will get a lot of annoying popups telling you that you have to download software, or that you are missing a plugin, etc.  YOU DON'T!  JUST CLOSE THEM!  These popups typically cover the screen and the media player controls.  Look for the tiny "x" somewhere on the popup and close it.  Sometimes you have to…

The more I teach tennis the more I realize how important it is to be patient and flexible with your students. Over the years I’ve had the opportunity to observe thousand of different tennis players and focus on how they learn tennis and try to understand why they behave and choose to do what they do on the Tennis court…

It still amazes me how variably different the…

Andy Murray: Keeping His Eye On The Prize

World number three Andy Murray returns to match play this weekend at Indian Wells. He could take over the number two spot in the ATP rankings by reaching the finals. But there’s a catch. This changing of the guard can only take place if world #2 Roger Federer loses before the semis. Wonder what the odds of that happening are?

At any rate, to help things along, third seeded Murray has a first round bye  and will play either Evgeny Donskoy or Tatsuma Ito on Saturday or Sunday. On…

Yeah...this is where I practice during the weekday. Sad. 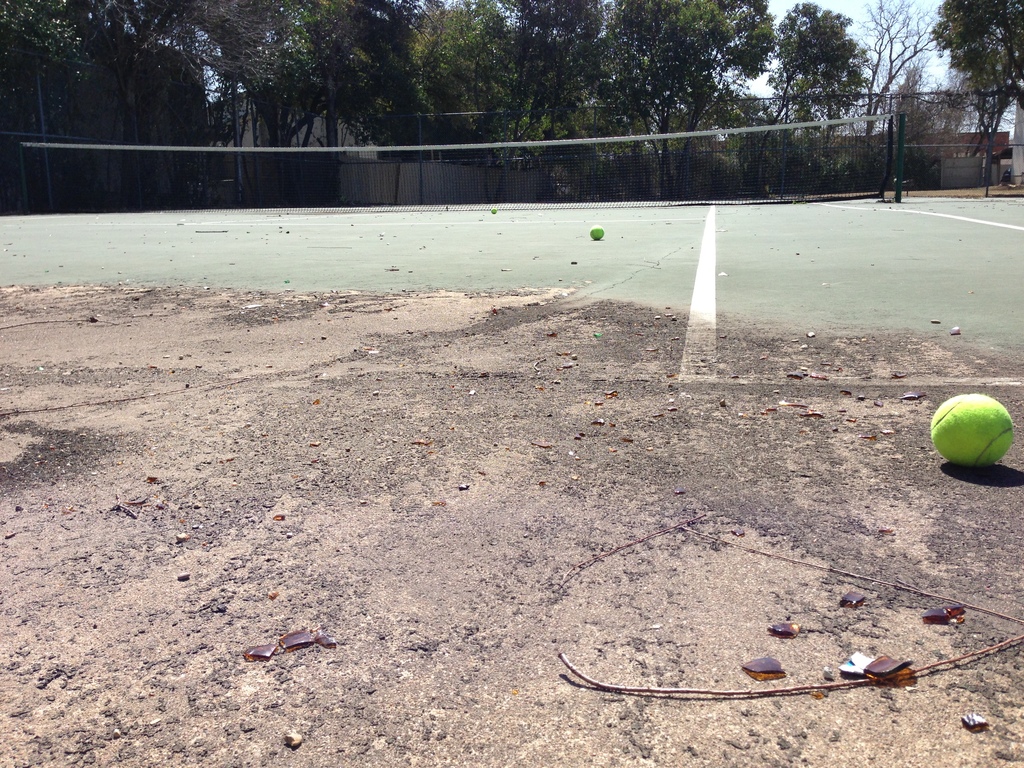 Okay, well...I'm going to start out by saying I really don't care if anyone reads this blog. This is more for my own personal development as a competitive tennis player. I've tried blogs in the past and I got more caught up in the promotion and the desire to have people read and comment on it than actually caring about what I post.

Anyways, I'm Andy. I'm 32. I'm a father of 2 and married. I'm a Systems Admin for a large company in Richardson, TX. I have a real hard time trying… 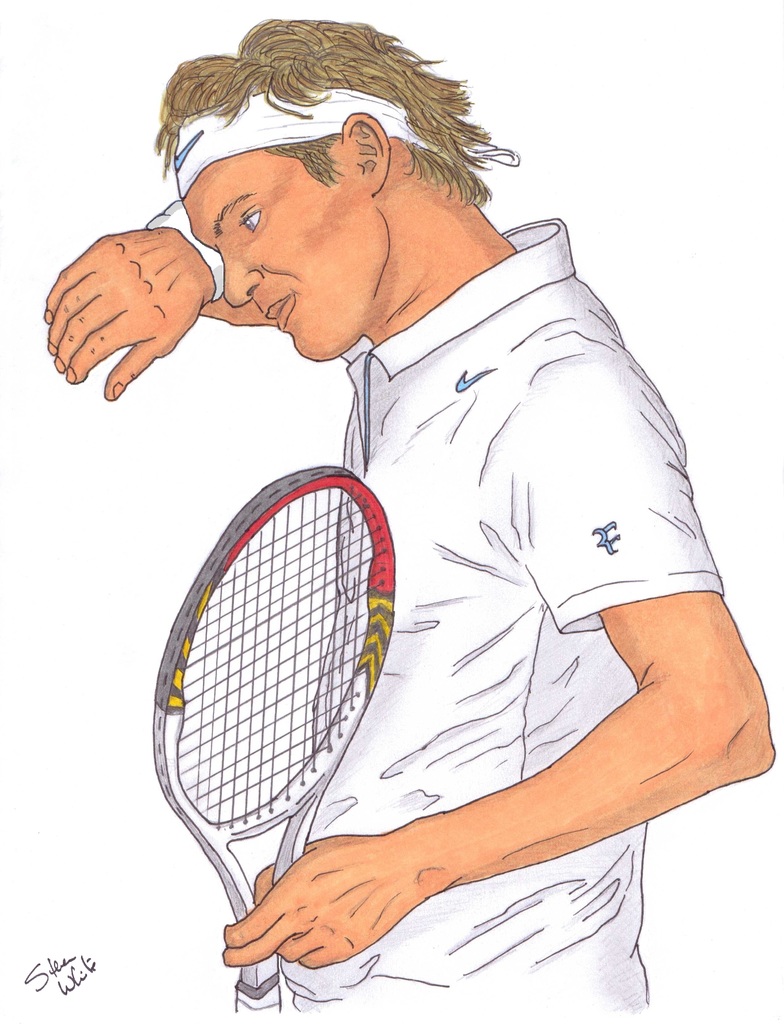 As a proud member of the Tennisopolis family, I'm pleased to announce that I've finally made my illustrations and drawings available to the general public as prints on pulled canvas or as framed art on the international art stage at Fine Art America ( …

This Week in Tennis 3-2-2013: Does the USTA Use Intimidation and Practice a Form of Taxation Without Representation?

Is the USTA practicing taxation without representation? Does the USTA attempt to intimidate their critics? How will Milos Raonic and Kei Nishikori fare this season? Will there be any male from the USA in the top 10 at seasons end? Host Phil Naessens answers your questions and more on this weeks edition of This Week in Tennis.