The Best of the Rest

Meanwhile, over on the ATP tour …

The two tournaments going on this week, one in Thailand and the other in Kuala Lumpur (which HCFoo has been covering religiously!) feature pretty strong fields, and I just noticed something interesting—at least to me, tennis dork that I am: Between the two, none of the top six players are competing.

Usually, I'm all like, "The big guns should be out there," but with each event having a… Continue

Beginner looking to play with other beginners or someone who doesn't mind that I am new to this sport.
Active gal, bored of jogging and the gym but love tennis. Kidding about being terrible, just new to it. Wanna play, bring it.


and how do do… Continue

Tennis Lesson: When to Approach the Net and How

"I don't know about the other players, but I feel like I didn't have enough time to recover after the U.S. Open. It's hard to get ready for such a big event like this and I just wish we had more time." — Elena Dementieva, after falling in the second round of this week's Pan Pacific Open.

Dementieva, if you recall, lost in the second round at the U.S. Open to Melanie Oudin.

I am looking for a study partner/partners to play indoor tennis with. The weather is getting progressively worse so might as well start now. The ideal person should be consistent and be able to play at least a couple of times a week...schedule can be arranged to meet both our needs. I'm around a 4.0 and I play at Tennis Longueuil. This is by far the cheapest indoor tennis club to join since membership is only $10/yr. All we have to do is split the court fees each time we play. Please contact me… Continue

Back (AT LAST) in the Winner's Circle

Funny thing about the week that just passed:

When I was scouring the ATP and WTA sites at the beginning of it, two tournaments really intrigued me: the ATP stop in France and the WTA event in Korea. Despite the lack of top tenners in either draw, I thought they both had interesting potential, particularly in regard to the top seeds.

First, let me talk about the men's event in Metz, where the top seed was Gael Monfils. Now, I don't know how you feel about his game but it… Continue

Last week was the first week I played three league matches, and I must say it was a BLAST!

The first night was women's round robin doubles, and definitely the longest night of tennis, as it is a guaranteed three matches. I found that my net game had suffered some loss of confidence, as I just didn't feel good about my volleys. My serves were pretty good during the first set, including getting an ace based on deliberately placing it away from the receiver. Unfortunately, my arm got a… Continue

SloMo: Topspin Forehand of a Professional

More and more, coaches seem to be buying into the idea that success in any sport involves far more than physical fitness and technical mastery. This is not to say that both of these aspects of preparation are not important. On the contrary, it is only by being superbly fit that you can have a chance of hanging with the top players. And physical fitness is certainly one… Continue

Psychological Skills Training (PST) is the process by which the conditions that produce optimal performance are broken down into requisite skills. These can be taught to players like Vera Zvonareva and Dinara Safina who have the potential to succeed but whose heads keep getting in the way.

But in order for PST to work, players have to first be able to… Continue

The Quarterfinals match of Ricky vs… Continue

How PST could help Vera and Dinara 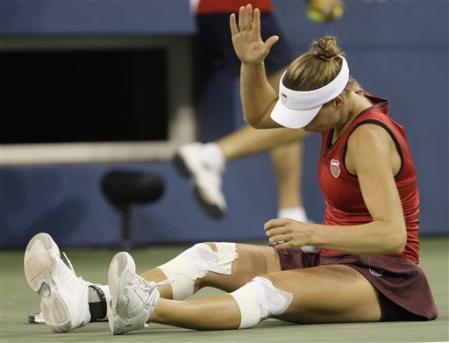 I sat next to a crying woman in church last Sunday. She was unkempt, her face blotchy and pimpled, her eyes blindly staring. Huge tears rolled down her cheeks. She seemed lost in her own world, her sadness painful and acute. It was all a bit unseemly. There was about her a sense of not caring that she was on display, gripped as she was by the kind of unmuted grieving that makes people uncomfortable, that makes them want to hug and shake you at… Continue

I would love to hit. With someone competitive or a female who would like to learn. Jamfishe@indiana.edu.

Strength and Weaknesses of Two-Handed Groundstrokes


Discussion about the strength and weaknesses of two handed… Continue

Add Height to your Serve

Jumping into your serve is a… Continue

USTA is having a terrible, horrible, very bad day

I almost feel badly for the USTA. Yes I know that that sounds unbelievable given my own relatively frequent tirades against their incompetence. But the last thing I would have wanted the organization that represents tennis to face was an allegation of racism. That is an ugly accusation. It’s the kind of accusation that even when you win, as Zina Garrison apparently has,… Continue

I love this serve because Shuai is about 5 feet 4 inches tall, but her serve is… Continue