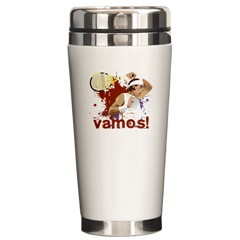 CUSTOMYZE IT - Letting Players Create their Own Racquet Cosmetics

I often use most of my energy during the first set and feel that I don't have enough energy to get me through the second or sometimes third set. There have been times where I have one the first set and should have one the second set, but lose the match because I get too tired and make too many errors. What can I do to increase my stamina? What in between match training do you recommend? Other advice??