'm looking for intermediate to advanced players who put a good pace on the ball. I'm available to hit during the week and on the weekend too. I live across the street Palms/Motor. Timings evening 7.00 to 9.00.
Do mail me sunvoyage@gmail.com NRTP Rating:3.5 to 4.

Rarely does Djokovic whisper as he does here to his charming compatriot and Hopman Cup doubles partner, Jelena Jankovic. Generally, the ATP’s most engaging superstar proclaims his sentiments to the world in unambiguous fashion. Typical of this trait was the bravado with which he addressed his Friday confrontation againt Verdasco, who inflicted Djokovic’s worst defeat as a top-10 player two weeks…

I am looking to play in the south suburbs of Chicago in the afternoons around 5 or in the mornings around 6. Let me know if you would like to play

The Problems With Roger

I really do believe, that if you look back through over the years, you will see that tennis players who recently got married, or had children, then their game took a dip.

Lleyton Hewitt was a classic example.Your life changes, and if you are a pro sportsperson then it changes even more.

I really believe that his values will have changed a little, but he will be back, and I think Wimbledon will be his time.

I hope so, because to see him lose like…

Before discussing the volatile vixen above and her imposing task tomorrow, we wanted to share our thoughts from the scintillating clash between Radwanska and the second half of our pseudonym. Contested at a far higher level than their Miami meeting, this match demonstrated the progress that both players have accomplished over the last…

The Olympics, vs. Fed Cup/Davis Cup

The cliche says that a girl’s best friends are diamonds, but the entry list for the Porsche event in Stuttgart suggests that WTA stars must be very good friends with splashy sports cars as well. Even after the withdrawals of Venus and Clijsters, the 30-player field is saturated with talent to the extent normally associated with the Sydney tournament just before the Australian Open.…

Fed Cup: It's like the 1980 Winter Olympics all over again!

Back then, the U.S. beat Russia in hockey in the famous "Miracle on Ice" game. Thirty years later, there's a new parallel to that with the U.S. Fed Cup team beating heavily favored Russia to advance to the finals of the competition.

On paper, the U.S. should've been hard-pressed to win one rubber, much less the whole tie. But I have to tell you, the job Mary Joe Fernandez has been doing the past two years is nothing… Continue

Really interested in getting started again! Its been years since I've played. Anyone with a little bit of patience . . ? I can meet most anywhere evenings and weekends. -Ciao

After enjoying one of the smoothest imaginable draws in Monte Carlo, Nadal now must tackle one of the most difficult paths imaginable in order to capture his fifth Rome title, which would tie him with Agassi for the Masters 1000 record. Just to reach the final, he likely will be forced to overcome Soderling and Federer, the two players who defeated him on his favorite surface last year. Should he…

Lookin for some rumble on the concrete jungle... in exchange for Golf Tips

I am interested in playing with 4.0 or better men or women tennis players who wouldn't mind showing me a thing or two on the courts... I have a fair serve and a descent ground game, my volleys need sharpening and my footwork can use some guidance as well... I have a background of professional Golf (playing and instructing) so I can offer tips on the course in return for tips on the courts... I currently work at Chambers Bay Golf Course as a Turf Crew member on the Greens Crew. I am available to… Continue

One might have thought that Henin’s broken finger would have given Team Estonia some hope, for they’ll be confronting a Belgian team without the seven-time Grand Slam champion as its #2 singles player. But 13th-ranked Yanina Wickmayer (pictured above) represents the insurance policy of anyone’s dreams; the Belgian cup runneth over indeed. Although that tie is virtually a foregone…

Looking for some serious 4.0+ tennis with...

Hey, feel free to email me if you would like to play some fun but competitive tennis at the 4.0+ level. You can reach me at jaxxon66@hotmail.com. I am a member at the Valley Athletic Club in Tumwater and can have guest play there. In addition, I work in Tacoma at Chambers Bay Golf Course and can play locally on out door courts if that works... lookin forward to hittin the courts. Jeffrey 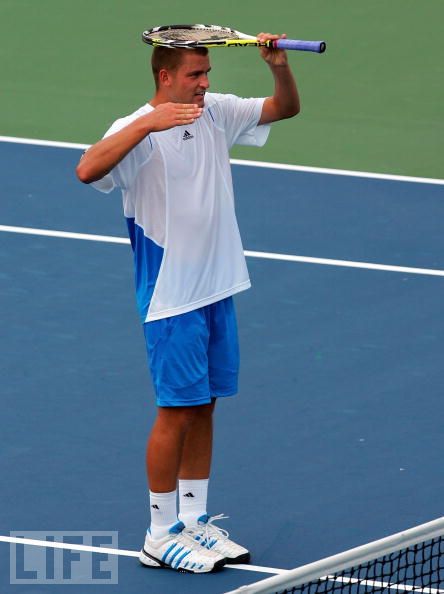 Hooking up and splitting up, in doubles

A doubles partnership is very much like a marriage. Some people enter it at a whim, not really expecting anything to come from it. In such cases, usually nothing does. The players involved may enjoy a win or three, but once they get past the infatuation phase, they discover that they really don’t have what it takes to last. And they split.… Continue

There's only one tournament on the ATP calendar this week, the event in Barcelona. Rafael Nadal was the top seed, but withdrew before the tournament started. Not that it really matters to him, but that's fine with me: Approaching his schedule with some caution is a good move.

I have to admit, I am anxious to see what he does his next time out after watching him completely and utterly destroy the field in Monte Carlo. Every scoreline, even the finals against countryman Fernando… Continue

Author, Steven White brings twenty-five years of tennis teaching experience to focus on the fundamentals of the game for the young, the beginning, and the improving player. The book allows young readers to learn the basic strokes of tennis from easy-to-follow text, written with a combination of simple and more complex sentences and carefully introducing new vocabulary. And it's Manga illustrated! The Manga characters not only provide an interesting…