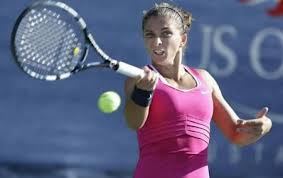 Sara Errani is having the best year of her tennis career. And the Italian has now announced that she will not be working in the future with Luis Garcia del Moral, a former member of Lance Armstrong's medical staff.

"Now, his name is not a good name," Errani said.

Del Moral was one of three members on Armstrong's medical staff handed lifetime suspensions. Errani is through to the semi finals of the singles event and is also in the doubles final at the US Open.

Errani is likely to climb to no. 7 in the singles rankings and will ascend to the top spot in the doubles next week.

I don't know if they keep samples in testing for tennis players. Do you know, Steven?

Oh no! I hope they kept her samples. Late career high levels? It smacks of all those steroiders in baseball. I hope that I am wrong.

A former Armstrong staffer? As long as she doesn't get a sporting ban from hidden test results, she'll be okay. lol