With Sam Stosur, expect the unexpected

Don’t let that Aussie “aw shucks” demeanor fool you, or the placid body language hidden by her signature Oakleys as she goes about her business in a workmanlike manner around the court. She does not “Pojd” like Petra Kvitova, roar like Serena Williams, or throw in full-body fistpumps like Ana Ivanovic. She does not slam her racket a la Victoria Azarenka or negatively stalk the court like Agnieszka Radwanska or Angelique Kerber. Yes, Stosur may be the most even-keeled woman on the WTA Tour. 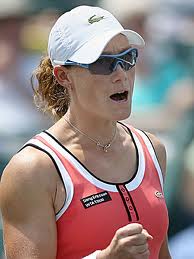 Stosur has earned the distinction of being a virtually title-less champion. For a woman who has won a Slam, made another Slam final, and two Slam semifinals, the 27-year-old has a mere three titles to her name. Yet when you look at what Stosur has been able to do over the course of her 13-year career, she has proven herself to be the queen of the unexpected. Matches she is expected to win, she loses. Look no further than her first-round exit at this year’s Australian Open to Sorana Cirstea. Write that off to unfair pressure at her home Slam? Fine. How about her French Open loss to Francesca Schiavone in the 2010 final or her loss to Sara Errani in the French Open semifinal this year? Stosur has never worn the “heavy favorite” label well and as a woman who generally lives her life and goes about her career outside of the limelight, I suspect those Oakley sunglasses have hidden more deer-in-the-headlight looks than she’d like to share.

But for all that Stosur hasn’t done in her career, it’s impossible to ignore what she has done, things that very few women have ever been able to do. When the pressure is off, when Stosur has been able to come as a heavy underdog, she has played some of her best tennis to dethrone the greats.

She’s the last woman to beat Justine Henin on clay — a surface upon which the four-time French Open champion was virtually unbeatable — doing so by coming back from a set down to beat her at Roland Garros in 2010. She’s the only woman to beat Serena in a Slam final other than Venus since 2004. As a heavy underdog to Serena last year in the U.S. Open final, Stosur stepped up to play the match of her career, refusing to wilt before the woman who was undefeated last summer or to the chaos that surrounded her after Serena started calling people “Ugly on the inside.”

When you think she’ll zig, Stosur zags. So when she returned to Flushing Meadows last week to begin the defense of her U.S. Open title, it was hard to know what to expect. She has never defended a title in her career (albeit a misleading stat considering she’d only won two before the U.S. Open last year) and she was cruelly given a tough draw, where she could have met either Kim Clijsters or Li Na before the quarterfinals. Neither match materialized thanks to British teen Laura Robson, who Stosur took care of to set up a quarterfinal matchup against No. 1 Victoria Azarenka, a woman she had never taken a set from in six matches.

When you talk about ownage, Azarenka had Stosur’s pink slip in a titanium safe. Azarenka, one of the best returners in the women’s game, had an incredible ability to neutralize Stosur’s serve and she successfully created angles from neutral balls in the middle of the court, getting Stosur on the run. Their matches had not even been close. Stosur had not won more than five games in any of their matches since 2008. It was an odd matchup problem that manifested itself mentally. Stosur never had a Serena problem — she’s beaten her three times in her career — but seemed to pack it in before she even took the court against Azarenka.

“I guess going into a match like that where you’ve never beaten a player before, you’ve got to just play well and really get everything out of yourself that you can,” Stosur said after the match.

Today, as Azarenka pocketed the first set easily, racing out to a 3-0 lead before taking the set 6-1, this was shaping up to be the same old script. The world No. 1 was breaking the Aussie’s powerful serve at will and Stosur looked helpless in the face of such relentless hitting. It was looking to be a very disappointing effort for the defending champ, but one that the stats told you was coming.

But Stosur didn’t go quietly, and that was as much the story of this match as it was Azarenka’s mental fortitude in avoiding the upset. When Azarenka let up her focus for just a blink, Stosur pounced, breaking to 4-3 in the second set and serving it out.

Serving from behind in the third set, the Aussie rebounded from two straight breaks to break back and successfully serving to stay in the match twice to force a decisive tiebreak. Through it all, her focus never wavered. Not known for either her backhand or defense — in fact they’re both major weaknesses — Stosur chased down balls from sideline to sideline and stood tall when Azarenka fired shot after shot to her backhand in an attempt to draw the error.

In the end it was Azarenka’s uncanny ability to neutralize Stosur’s serve out wide that made the difference. It’s not just that she can get the ball back, but she gets it back deep, often times right at Stosur’s feet, earning a weak reply with which she can take control of the point. After falling behind 0-4 in the tiebreak, Stosur fought back — again with some amazing defense — to knot it up at 5-5 on her serve. While much will be made of the perfect drop shot Azarenka hit to win the next point, my jaw dropped at the forehand return she hit to set it all up.

Stretched wide by a Stosur kick, Azarenka yanked it back right at Stosur’s feet. That was gutsy, No. 1 Slam champion winning stuff. It earned her a match point, which she immediately converted to make her first U.S. Open semifinal. In a match that was turned on the smallest of margins, Azarenka was forced to be brave, to take her chances, and to execute. The defending champion, grilled before the tournament about whether she thought her title run last year was “a fluke,” made Azarenka earn her win, silencing the hallway whispers that her name never belonged on that trophy in the first place.

“Of course there’s always going to be disappointment when you lose, you know, quarter of the US Open,” Stosur said. “But I have to say I’m really pleased with the way I played. I thought it was a really, really good match, and there was, what, a point or two in it.”

“I’m really happy with the way I played out there, and I gave it everything I had.”

Previously posted on Beyond the Baseline

Oops! I really meant to leave the "Drama Queen" comment out of this article. Thanks for picking up on that.

Mr. White, Where is the justification in the article for calling her a ' drama queen ' ? Or does drama queen in your dictionary define differently than in mine ? ;-)