Jan Kodes: Will We See A New US Open Champion? 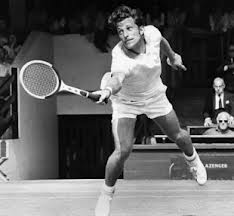 Jan Kodes of the Czech Republic, the 1973 Wimbledon champion, 1970-71 French Open champion and the 1971 and 1973 US Open singles runner-up, is the author of the book A JOURNEY TO GLORY FROM BEHIND THE IRON CURTAIN, a one-of-a-kind coffee table book that documents the history of tennis in the Czech Republic. The book features an incredible array of historic and never seen before photos and many anecdotes and stories about Czech players including Martina Navratilova, Ivan Lendl and many others. It is available for 24 percent off here: http://www.amazon.com/Jan-Kodes-Journey-Behind-Curtain/dp/094225768...

Tomas Berdych and Andy Murray will play an interesting US Open semifinal match on Saturday – each player very eager to try and get to the final to play for their first major singles title. This should be extremely good battle!

The game of Berdych, my countryman, has improved from earlier this year and his first serve worked very well against Roger Federer in his quarterfinal upset of the No. 1 seed. Berdych’s confidence is high. Federer did not show his best at all, but you play as well as your opponent lets you play and Berdych did not give him much. He overpowered him and hit his groundstrokes with full power most of the time.

Murray has improved too this year and is much more confident after winning the gold medal at the Olympics. He is moving very well and he is fighting very well even when he is down, which was the style of his coach Ivan Lendl. Murray is different person now than before the Olympics and he is the favorite against Berdych.

In some ways, Berdych’s battle with Murray should be much more difficult compared to the quarterfinal with Federer. Both players know well that the semifinal and final back to back – Saturday and Sunday – is an incredible physical and mental task. A key to winning the title will be who has a tougher match in the semifinals and who plays in the first semifinal and has more time to recover for the final. It is interesting to note that Novak Djokovic, who plays David Ferrer in the other semifinal, has had a much easier run to the semifinals. He has not lost a set and only lost 32 games en route.

Berdych will also be the key man for the Czech Davis Cup team who play against Argentina in the semifinals in Buenos Aires next week on clay! This must be psychologically hard on Tomas now too, but I am sure that this weekend at the US Open will mean much more for him. For him to win both events in this time would fulfill his grandest dreams!

Too bad for Berdych. He was lost out there against Muzza.