I started playing tennis in 1970 with a no name brand aluminum racquet. The metal racquet back then were very poor quality. You could bend then with your bare hands, I'm surprised you could hit tennis balls with them. I went through about 3 of these aluminum racquets until my Junior year in High School. It was then that I got my first real tennis racquet, a Spalding Smasher aluminum racquet. My Senior year I got another racquet, a Head Master with the blue… Continue

If you are into following the pros, come play this bracket challenge game with us. You pick the winners of all the Aussie Open matches to the final, before the first point is ever played. Each correct pick gets you points. The person with the most points wins. Wins what? *bragging rights*.

Here's an interesting twist: Everyone that plays the challenge here is on the Tennisopolis Team which is up against some other…

Hitting on the Rise

Andre Agassi popularized a new and aggressive way to play tennis. He would stand close to the baseline and hit most balls as they rose from the bounce. We now call this “hitting on the rise”. The traditional method to hit groundstrokes was to let the ball bounce, reach it’s peak then strike the ball as it descended towards the ground. But Agassi’s incredible timing allowed…

The continental grip is the best for both the forehand and backhand drop shots because it naturally tilts the strings open to lift the ball up. This allows the player to put…

Many tennis players have a misconception of achieving topspin on groundstrokes. I will try to clear the air in simple terms.

Topspin or overspin is when the ball is spinning over itself in the direction moving forward. Topspin can be achieved…

The key to hitting great volleys is all in the hands. The hands hold the racquet in a position to make the volley work.

The best grip for volleys is the Continental grip. This grip allows for the forehand and backhand volleys and overheads to be hit with the same grip. Not having to change the grip is critical for quick…

Recently I received an email asking me how does one handle high balls. High bouncing balls are relative. It is not how high the ball is bouncing but where it bounces is more appropriate. Balls landing near the baseline create a situation where the player will have to do one of three things.… 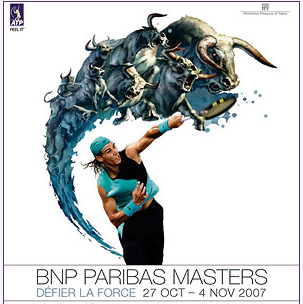 I'm totally into the new ATP ad campaign which is dubbed "FEEL IT". Check out this image with Rafa and the raging bulls. There's another one that has Federer powered by the tennis greats of all time. They are really attractive in their own right - almost art pieces. I think the ATP is going to get some attention (and maybe new fans???) with these. To check out more, click…

What can I do here?

Welcome to Tennisopolis, the tennis social network. The site is very powerful and may be a bit intimidating at first. Here's a little primer for you.

We are all very excited to have created this "community-based" tennis social network which puts the focus on the members.

To get started, please upload a photo or avatar for yourself (if you haven’t already.)… Continue