How (and when) to Serve & Volley for Easy Points

Pat Rafter just put his 4th free video lesson online.  He teaches us how to serve and volley... like a BOSS!
Earlier Pat taught you how to turn your serve into a consistent and reliable weapon by hitting a kick serve.  Today you will learn how to back that serve up by coming to net for easy points.
You don't want to hit a great serve but then take your foot off the gas.  Why get into a rally when you can end the point in the next few…
Continue

Host Phil Naessens congratulates Novak Djokovic on his impressive win over Rafael Nadal in last weeks Monte Carlo Rolex Open, congratulates Italy and Russia on their recent Fed Cup Wins, comments about The All England Clubs huge raise in prize money at the 2013 Wimbledon Grand Slam and reviews this past weeks mens tournaments going on in Barcelona and…

Your weak return of serve is costing you matches.…

For some people, tennis can be an intimidating sport, especially if you are just starting out.  I joined Tennisopolis back in 2010, just to play some tennis and socialize.  Well, I ran into some players who didn’t know the game.  It was frustrating for me (a 5.0 player) to hit with them (3.0 players).  We always ended up not playing a match or not even rallying.  I always ended up teaching them how to play the game.  That’s okay.  I don’t have a problem teaching…

Pat Rafter Teaches You to Fix Your Toss

Do you struggle with your toss?  If the answer is yes, then you’re not alone.  I'd say roughly 3/4 of Tennisopolis members do.

In Pat Rafter's second free video lesson, he shares a story about his struggle to develop a consistent & reliable toss.  He also tells us how he solved the problem, confused his own dad, and the rest is history - winning the US Open twice.…

Amateur Player: Looking for a tennis player to play tennis with

I'm a amateur player, as far as my skill level, I'm looking for someone to practice and play tennis with for recreational purposes. Please hit me up if interested. Thank you.

Looking for someone to play tennis with...

I live in Arnold and I'm willing to travel a reasonable distance.  Wife wants me out of the house!

Host Phil Naessens pays tribute to legendary play by play announcer Pat Summerall, answers listeners questions about Phil’s seeming lack of love for the game of tennis, how someone can be a guest on the show and looks at all the highs and lows of this weeks Monte Carlo Rolex Masters on this edition of This Week in…

and why it is the Best Serve at the Recreational Level…

Learning a Forehand by Serioustennislessons.com

The Forehand can seem like a very complicated stroke to master as there are several steps that need to happen in a particular order with great fluidity and smoothness. To start without feeling overwhelmed here are the steps that need to be understood and perfected:

To learn more about how mastering these three steps can help you hit a world class forehand check out my blog:…

Come watch the pros play May 6-12 at North Hills Club.  Admission is For FREE, but donations are welcome for the local Boys and Girls Club of Raleigh.

This Week in Tennis 4-13-2013: Look Out Tennis World the Canadians Are Coming

looking for a hit tomorrow tuesday 4/2 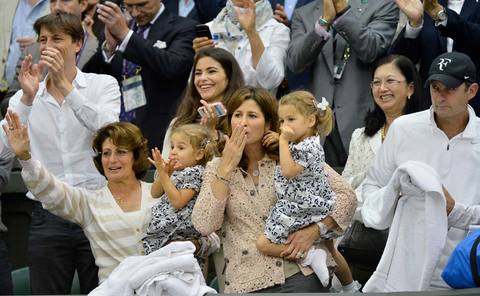 Basel, Switzerland
Roger Federer and wife Mirka Vavrinec are expecting twins once again.  Medical staff at Universitaets Kinderspital beider Basel have reported that Mirka is pregnant with another set of "identicals", but this time they are boys.  Mirka and the babies are reported to be in excellent health, but…