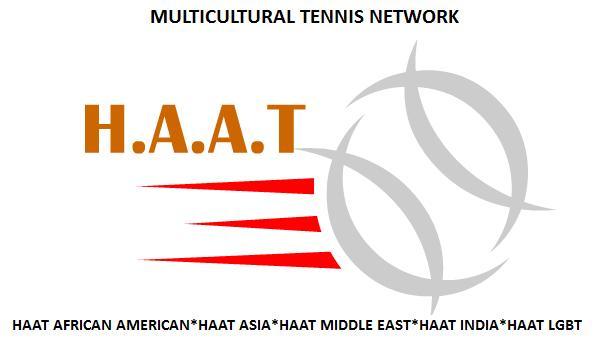 Are you in the tennis industry as an instructor, facility, and/or manufacturer? Are you looking to get more exposure. Have you thought about using the Social Media networks? If you have thought about…Continue

Random things about me (hobbies, occupation, tennis history, favorite band, etc.):
HAAT is an acronym for Hispanic African American, Asian Tennis, also includes HAAT India, HAAT Middle East and HAAT LGBT. This is tennis for the people by the people, what is said and written on HAAT is not right or wrong, but meant to be a candid discussion and meant to shed light and cover all the great tennis communities and players, their ethnicities and start shedding light on their impact in the tennis world. We look to inspire people to play tennis, we look to be a leader in under-served tennis and be the voice of many who have nothing that represents or speaks to them whatsoever. We look to bring the game into communities that are minorities right now, and with our roster of coaches, writers, bloggers and tennis enthusiasts, share the best sport on earth, tennis.

Tennis World SA would like to announce the hiring of Andre Christopher Smith as the new Director of Publishing for their USA edition – Tennis World USA.


ATLANTA, GA, JULY 12, 2010 – The Atlanta Tennis Championships named Andrew Young, former U. S. Ambassador to the United Nations and noted civic and business leader in Atlanta, the honorary chairman of the…

10 NIS 4 ALL writes its first Tennis Article for its partnership with an Italian Tennis Magazine...

10 NIS 4 ALL based out of Atlanta Georgia area has begun a long term collaboration with the Italian Tennis Online Magazine Pianeta Tennis. The inaugural article covered the Men's Finals at Wimbledon. You can read the article either at Pianeta Tennis (www.pianetatennis.com) or at 10 NIS 4 ALL Tennis blog (http://10nis4all.blogspot.com).

Red Ribbon
GIVE Blood
From the Gift Store

Mark / The Mayor said…
Hi! Welcome to Tennisopolis which connects you with your tennis network: players, fans, coaches, clubs and groups.

Special Announcement: Right now we are giving a way a tennis trip to the Hyatt Regency in Scottsdale, Arizona. Win the trip, the hotel, the airline tickets and even tennis lessons with world renowned pro Rafael Font De Mora! Click here.

What can you do here? At Tennisopolis, you can:

- network with your tennis friends. Invite your tennis friends and build your network now.
- meet new players. Here's a primer on how to find partners.
- join a Group. Members have started over 250 Local Groups (and other types of Groups too.) Search for one in your area, or start your own.
- follow the pros. There are over 1100 blog posts on Tennisopolis. Have a good read, or write your own.
- improve your game. Get tips in the Forum and check out video lessons.
- post your own Videos and add your own Photos.


Thanks to everyone inviting their friends, we now have over 23,000 member. Invite yours too!

If you need any help, let me know.
Friend me!
Mark