Landsdorp: Is he right about U.S. academies and the USTA programs?

Here is the blog entry in its entirety:

Most coaches in this country don’t know much at all about coaching. They are just horrible. They know how to talk a great game and people believe them. You don’t know who is great and who is not.

The USPTA is for quantity, not quality any more. Anybody is a coach these days. If you can poke a ball over the net and get a basket of balls, you are a coach. If you can talk a great game you must be great. So many times the parents are smarter than the ” PRO ” and know more. IT is not the PARENTS!

Another thing that is happening in this country is that every body has Academies!! Academies don’t create Champions. THEY DON’T !!!

But people don’t want to believe me. Every club in the US has “Academies” and if the coach has one pretty good player he will start an ” Academy “! It is more money in his pocket.  So the “One on One” has left this country.

Name me one top tenner that has come out of the Chris Evert Academy in the last 10 years? Name me one? Even top 30 player? I like Rick Macci, but who came out of his Academy in the last 10 years? And all these so, and so,  Academies in clubs don’t develop players. If in the past the kids were in Academies, it was always a family member running the show. They were in control.

I am at fault a little. My rates have gone up to $200 an hour.  Not outrageous, like some pro’s but too expensive for a lot a people. So, the “One on One” is disappearing!

“Academies” are popping up all over the place and now comes the second problem. Everybody and I mean everybody is in hitting lots of topspin and hitting “Academy” balls. High over the net with lots of topspin. Then you look at the top pro’s and they are all hitting the hell out of the ball. Very hard,  fairly low over the net, not much higher than 2 1/2 feet over the net, AND CONSISTENT! Consistent, because they have been doing it since they were young.

This Academy ball is a big problem in getting Champions. Because of the Academies, you are losing the “One on One” teaching and there goes the DISCIPLINE! Now you are in real trouble! No discipline…. No Champions!

Also, the attitude of people has changed after the Capriaty debacle. Let’s just go to college! Nothing wrong with that, but no Champion will develop with that attitude. And don’t bring up Isner!

Probably 99% of the world class players hardly went to high school and never went to college. Combining the two does not work. Going to a hard private High School is the death in becoming a great player,  forget becoming a Champion.

On top of all this you have a bunch of money hungry people running the USTA Junior “Development” Program. Nothing good will come out of the USTA Junior Development. They are just stealing players from other coaches and then messing them up and forgetting them. What a great organization!

There are hundreds and hundreds of very talented youngsters in this country, but they don’t get developed into Champions. Making of Champions is an art and a gift!

Well he is right that everyone has an "academy".  Even my little club, who is bringing in a new head pro, will have one.  Of our 10 finalists for the job, I think 8 were calling their program an academy.  I also agree with him regarding the "academy shot" - the topspin looper that clears the net by 4 feet.  We have some great young players in ABQ, and many go to the leading academy here and they let them use that extreme western forehand - I know a few kids who had nice forehands that were morphed into this extreme western nonsense in a matter of weeks.  I feel for the kids because they can never go too far with that kind of stroke.

Yeah, but who DOES have the money for $200 an hour, Robert?  That is friggin' crazy.  Even $70 bucks an hour will put an average family in the red.  The one-on-one is just too expensive unless your parent is your coach - and this is why you see that so often with the top players.  Now, if only I could get my son to listen to me...

Depends on what type of Western forehand being developed. If it is just without momentum and pace, then the looper will win them matches against pushers and dinkers, but not against dedicated full extension Eastern grippers who hit through. But if it is a Western/ forehand with alot of drive, watch out. That forehand is a weapon!

The family I teach in Laguna Beach can afford to give me $45-60. Even then, it is too much then sometimes.

So you want to be the parent/coach, Mark? :)

That is true.  There is a fine line between a ripping Delpo forehand and a 12 year old girl with extreme western.  Delpo is able to deliver power because he is just so strong.  But these little kids can not generate the power and the swingpath ends up being different too.

Compare these two images. What is the dead giveaway that they have two different swingpaths?: 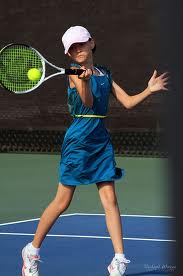 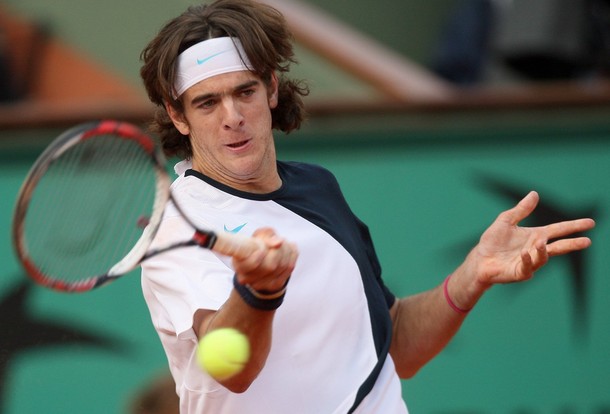 I would say Del Potro nowadays does not hit this way if he can help it. Here are three photos showing he goes for greater extension and less bend of the elbow. He also uses a more conservative grip with his palm less underneath the handle. The girl's palm is obviously below the handle, and hence the severe bend of the elbow. 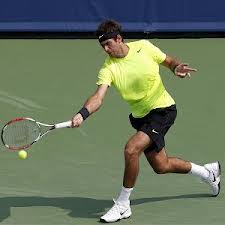 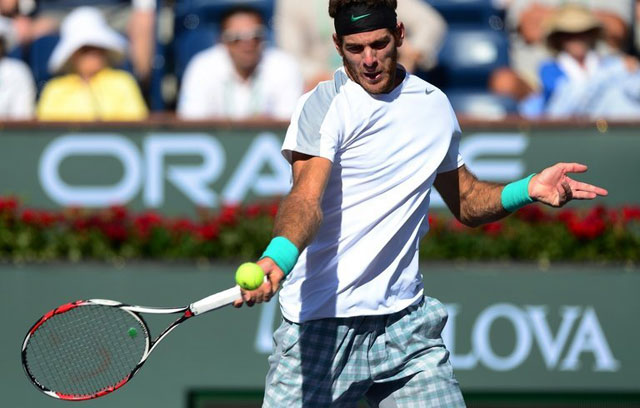 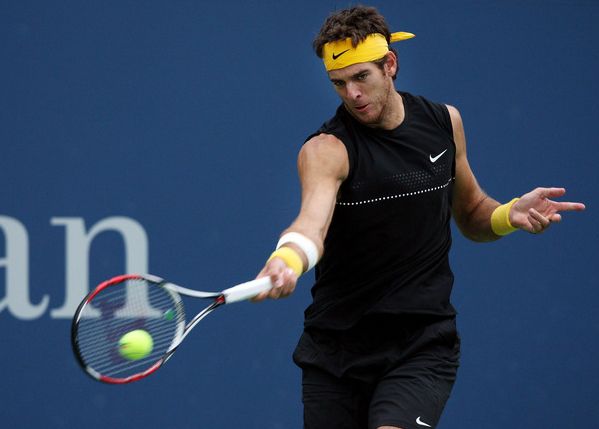 If the girl learns to extend through the shot, she will be able to hit pretty darn hard! The problem is her prep beforehand clearly does not allow it.

It is not the fault of the grip itself, but the operator who decided to take the linear pathway with an extreme grip. Unfortunately, the girl went this route.

Nadal or Djokovic did not take the linear pathway when they were on Western (Nadal) or extreme Semiwestern (Djokovic). They were able to get great extension when they bursted on the tour.

I've seen 12 year old girls, who and hit much like this one, who tear the cover off of the ball, on both sides.

I don't doubt that. But are they truly accurate?

I would even venture to say that this change in mechanics from earlier in his career (the pic you posted) brought him into a world class forehand.

I don't think Delpotro changed his mechanics.  In the first picture, the racquet has turned slightly in his hand after contact from making contact low on the racquet face.  Take enough pics of your forehand and you'll see the same thing.

Early on, notice the loop is more pronounced.

Up to 2007 Wimbledon, his racquet face is far more supinated than 2009 when he hit rockets.

This is not an DP extream grip this is an off center or below centered shot. the little girl on top has the wrong grip & will never make it with that grip......sorry mark if thats your kid. but here is the proof