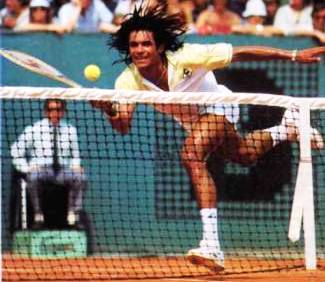 DURING a flamboyant career, French star Yannick Noah raised eyebrows with his athleticism, dare and flair on court.


But it is his accusations in a French newspaper last year alleging widespread doping among Spanish tennis players that, while inflaming tempers across the border, have some relevance to a development in New York this week.

"How can a country (Spain) dominate sport from one day to the next?" he asked. "Had they discovered avant-garde training techniques and methods that no one else imagined?"

While the past fortnight has for the most part been a celebration of the sport - the retirements of popular stars Kim Clijsters and Andy Roddick, the stellar if unsuccessful defence by Sam Stosur of her title and a courageous showing by Lleyton Hewitt - a murkier underbelly has emerged.

Over the past 24 hours, a grand slam semi-finalist has been quizzed about her relationship with a doctor banned for life for his involvement with Lance Armstrong and a tour battler was also suspended permanently for fixing matches.

Sara Errani, who was to play Serena Williams for a spot in the final earlier today, is among several tennis players linked to the disgraced Spanish doctor Luis Garcia del Moral, who has worked at a tennis academy in Valencia, Spain.

Others to have spent time at the academy include former world No 1 Dinara Safina, David Ferrer (another enjoying a standout year on tour) Igor Andreev, Mar aaca Kirilenko and Marat Safin.

Ferrer, who ended Hewitt's US Open campaign in four sets, yesterday qualified for the semi-finals, coming from behind to defeat Janko Tipsarevic in a fifth-set tiebreaker in a match lasting almost five hours.

Errani, who defeated Sam Stosur to reach this year's French Open final, was forced to defend her relationship with del Moral, the team physician for Armstrong's US Postal Service team between 1999 and 2003, after beating Roberta Vinci on Wednesday.

"Of course I'm not interested in ... working with one person that is involved in these things," she said.

"He was the best doctor in Valencia for everything, so I have been working with him of course. But now his name is not a good name."

"Numerous riders will testify that Dr del Moral gave to them, encouraged them to use and/or assisted them in using doping products and/or prohibited methods," said the USADA document.

One former rider said Garcia del Moral injected him with steroids. Another said he feared the health consequences of taking performance-enhancing drugs.

"You're not a real professional if you don't take drugs," Garcia del Moral allegedly said.

The International Tennis Federation recognises USADA's life ban and will refuse Garcia del Moral accreditation and access to any sanctioned event. It also warned players it was unwise to continue working with him.

In an interview in Italian last month, reproduced by The New York Times yesterday, Errani claimed she was ignorant of Garcia del Moral's misdeeds.

"I don't know what he was doing. I just think about my life. And I make all the anti-doping control like everybody, so I don't feel (bad) about that," she said.

"Of course, it's not a good thing for me. It's not the thing that maybe when you won, the people start to talk something bad.

While The Weekend Australian does not allege Errani is involved in any wrongdoing, there has long been suspicious about doping in tennis, as veteran doubles player Daniel Nestor told The New York Times three years ago. "We suspect that there is always stuff going on. I mean, we watch some of these matches where the guys play five hours and come back the next day and do it again," he said.

Some of the most decorated players have tested positive to illicit substances. Martina Hingis retired after a positive test to cocaine. Andre Agassi detailed in his autobiography Open how officials swept a positive test to methamphetamine under the carpet.

Even at club level in Melbourne, several players have raised doubts with this journalist about the legitimacy of some Australians attempting to make a living at the elite level.

Since 2007, the ITF has operated its doping program under the WADA code, which is considered gold standard. Veteran American James Blake said while he believes there are players doping, the system itself has improved drastically since he turned professional.

"This is not a knock on tennis, but when you have so many people playing and when there is so much at stake - there are thousands in the rankings, I would say there are certainly some short cuts being taken. Not that many, but it would be crazy to think differently.

"I don't know for sure. They've had instances over the years where people have tested positive but in today's world, in any area - I would include doctors, lawyers, any profession - drugs are everywhere. It's part of society. I don't think anything is clean.

"If you did a study of every area of life, including tennis, you would always find people who want to take a short cut."

Serbian player David Savic was yesterday found guilty of match-fixing and had his life ban confirmed by the Court of Arbitration for Sport.

Savic, who reached a career-high 363 ranking in 2009, claimed he was set up by a "current top player" who told the TIU that Savic asked him to fix a match in exchange for money. The player was not identified.

Previously posted in the Australian