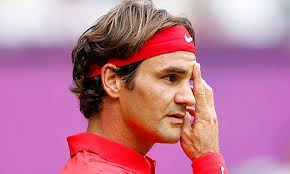 Despite Andy Murray's  Gold Medal and victory at the US Open, Roger Federer will officially remain the world's best player. At least that is what the ATP rankings will say, but with his 31st birthday behind him, questions again surround his reign.


It was the first time since the French Open of 2004 that neither Federer nor his long-term rival Rafael Nadal has figured in the semi-finals of a grand slam. The problem for the Spaniard is common knowledge; a troublesome left knee that has caused him pain for much of his career and seems likely to rule him out of action until the end of the year.

Federer was as majestic as ever in July when he once again broke Andy Murray's heart to win a seventh Wimbledon title. But the Scot's revenge in the Olympic final showed the Swiss player in a completely different light. A chronicle of his achievements here in New York, where he was determined to become the most prolific champion in the modern era, provides possibly the clearest indication of where this most glorious of careers currently stands.

Federer won five straight singles titles from 2004 until 2008. The following year he was the beaten finalist, his run ended by Juan Martin del Potro. In 2010 and 2011 his campaign ended at the semi-final stage and this year he was beaten in the quarter-finals by Tomas Berdych. The graph is one of steady decline.

Each of his US Open defeats bear similarities, featuring squandered early leads and missed opportunities. Del Potro trailed by a set but perseverance and power allowed him to win in five. More painfully for Federer to remember, he had match points in his 2010 and 2011 semis against Novak Djokovic but failed to convert them. This year, after losing the Olympic final, Federer beat Djokovic in style to win his only US Open warm-up event, in Cincinnati, but such a victory is scant consolation. He plays tennis to win the big prizes.

Normally, Federer can shrug off a defeat -- he admitted to being pleased for Murray at the Olympics -- but in the aftermath of his loss to Berdych there was negativity.

"I've got to go back to the drawing board and see what's really the priority for the end of the year," he said, alluding to the dilemma of whether he needs to conserve energy to prepare fully for 2013 or play a full schedule for the rest of this year, including the Asian swing, which he opted to miss last year.

"So I don't know right now. I mean the goal has been achieved, but this is disappointing for me. We'll see where I go from now."

Previously published in the Australian