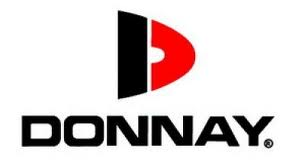 NEW YORK, December 21, 2012 — The results of an independently performed Racket Shock & Vibration Study are in and they dramatically show that multi-solid core frames produce less shock and vibration on initial contact and four (4x) times less shock and vibration time following contact than the racquets from the four leading brands which are all air injected or hollow.

The study was conducted by an independent third party test facility located in Shallotte, North Carolina that specializes in medical device and sport equipment testing. OrthoKinetic Technologies, LLC, the parent company, is a leading regulatory and consulting firm specializing in regulatory and test strategies for medical devices and sport equipment.

The Donnay racket dampened vibrations four times quicker with less vibratory forces than other models tested upon impact with a standardized force.

Both professional and recreational players get repetitive force transmission and vibrations to the tissues of the arm with the hits of the ball, and some of the shock is transmitted to the arm. The more prolonged the shock and vibration, the greater the risk for tissue injury.

In the study, the multi-solid core rackets vibrated for less than 1/5 of a second on ball contact, compared to an average of 7/10 of a second for other models tested. That means a player hitting 180 balls in a typical tennis match is subjected to more than 111 seconds of shock & vibration dwell time with the other brands versus a mere 32 seconds with the Donnay. Having a shock needle in the tendon for 2 minutes can cause severe harm especially to children and minors whose tendons are not even fully developed.

The extent of frame vibration transmitted to the arm holding the racquet depends largely on how well it is dampened. Multi solid-core XeneCore construction and manufacturing process acts as a super dampener to eliminate most all of the damaging vibrations.

In the old wood rackets, vibration disappeared quickly because it was dampened by the flex of the solid wood, but the new stiffer, lighter and hollow conventional frames do a poor job of snuffing out the vibrations, so they transfer this shaking to the arm that can stealthily sabotage the elbow, wrist, forearm and shoulder.

The longer the vibration and the longer a player rallies the more the tissues are stressed. This constant stressing is how a coathanger is broken by bending it back and worth. Eventually, tissue can fatigue resulting in localized inflammation, micro tearing, and micro injuries, even without any tremendous force.

Air injected racquets with their poor dampening properties cause pain (think of hitting a baseball with the hollow aluminum baseball bat on a chilly day).

For years the tennis industry has laid the blame for arm injuries on poor stroking techniques, conveniently diverting scrutiny from the design of racquets, but hollow, stiff, ultralight head-heavy racquets are more to blame. As conventional racquets have grown lighter and stiffer the number of players suffering from arm and elbow pain has also risen dramatically. The cause is no longer primarily related to mechanics, but rather to the equipment itself.

The study is of great significance for all players and the tennis industry as half of players are currently experiencing some form of arm pain and are looking for racquets that can minimize repeated long-term exposure to prolonged vibration and stress transfer to human tissue. According to the Tennis Industry Association’s latest study 30percent of players are playing less tennis or quit the sport altogether because of injury.

In short, if you’re trying to play hurt, you’re not playing well at all. And XeneCore is the solution that will keep you in the game, arm-injury free.

Posted by Steven White, Author of "Bring Your Racquet: Tennis Basics for Kids"

No, I haven't had the pleasure of using anything by Donnay recently...but I plan to try out the new frames sometime in the near future.

Have you tried the Pro One 97? I see Donnay sent me a sale offering two X-P Duals, bag and other doo-dads. I demo'd them two years ago with the 18 mm beam and I liked the feel.