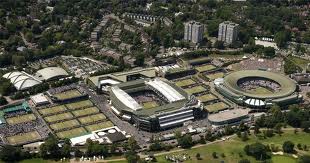 The All England Lawn Tennis and Croquet Club, also known as the All-England Club, London, England, is a private members club. It’s best known as the venue for the Wimbledon Championships, the only Grand Slam tennis event still held on grass. Initially an amateur event that occupied club members and their friends for a few days each summer, the championships have become far more prominent than the club itself. However, it still operates as a members tennis club, with many courts in use all year round.

The club has 375 full members, about 100 temporary playing members, and a number of honorary members, including past Wimbledon singles champions and people who have rendered distinguished service to the game. In order to become a full or temporary member, an applicant must obtain letters of support from four existing full members, two of whom must have known the applicant for at least three years. The name is then added to the Candidates' List. Honorary Members are elected from time to time by the club's Committee. Membership carries with it the right to purchase two tickets for each day of the Wimbledon Championships.

Lets face it, with Her Majesty the Queen as the Club Patron, and Prince Edward (the Duke of Kent) as its President, very few of us will ever have a chance to claim membership to this illustrious club. Not to worry though, I’m sure there’s a tennis club out there that’s just right for you. Here’s a few tips to consider before you join.

It's one thing if you play tennis for sport and for exercise, but quite another if you plan to compete. Competition venues have different types of courts that affect your game, so if you want to get into competitive tennis, you'll want a club that at least has the two main types of courts: hard and clay. Hard courts allow the ball to move faster, while clay slows the ball down and makes it bounce higher. If you want to be competition-ready, you should have your game down on both surfaces.

Most tennis pros are skilled tennis players, but not all are certified teachers, which is a big part of a good pro's job. Before signing up for pricy lessons, you should find out if they're certified by a tennis teaching organization like the Professional Tennis Registry (PTR), and then find out what their association and level is. You'll also want to find out how long they have been teaching, the ages and levels of play of their students and what kind of clubs they've worked for. Teaching at summer camp is quite different than working for a year-round tennis club.

If you have kids and want to make the club a family activity, then you'll want to make sure the club you choose has a well-developed children's program. Lessons should range from beginner to advanced and in case your kid turns out to be the next Steffi Graf, there are also programs to get competition-ready. Even if there aren't ambitions to go pro, tennis camps are great summer activities for kids who have shown that they have some racquet skills. Not only will this get your kids active but it will give you uninterrupted time to concentrate on your game.

What else do they offer?

Specialty clubs are nice if you're only interested in playing tennis, but a club with more choices may be a better family-friendly pick. As I mentioned before, many community tennis clubs are paired with a swimming pool, which is always great for kids in the summer. Or, if you and your spouse enjoy spending time on the links, there are golf and tennis clubs, too. Most clubs these days have informative Web sites, so you can get good information before setting up an appointment to visit.

As with any membership purchase, price is always a factor. Fortunately, prices for tennis clubs run the gamut. You have your community clubs that consist of private tennis courts, a tennis pro and sometimes a swimming pool that are more on the affordable side. Add more services like golf and restaurants and the price tag will climb some. Prices can skyrocket when you get to the big country clubs that come with a pro shop, all of the amenities and even spa services.

By Steven White, author and illustrator of Bring Your Racquet: Tennis Basics for Kids http://www.amazon.com/dp/1933794240