Serving Tips: Best Serving Lesson in the World For the Racket Drop

Today's serving lesson covers a very important topic...the racket drop. So many tennis players struggle to get into the proper racket drop position on the serve.

If you want more power and spin on your serve, then you want to master this serve technique. Today's serving lessons will get you positive results on the serve instantly

Secret Forehand Timing Tip: Learn How to Hit Forehands on the Rise Like Roger Federer

Tennis Tip: Ever have trouble with the high ball? Today I uncover the top 3 mistakes you are making and how to fix them.
If you do this exercise with me you will be taking the ball on the rise like Roger Federer in no time....

Enjoy this video and make sure to follow along with me.…

Secret Serving Patterns of the Pros

I recently teamed up with Kevin Garlington to make a new serving lesson video. Learning how to serve is hard enough, but then implementing the serve into match play is another challenge in itself.

In this brand new video your going to learn little knows serving strategies for righty and lefties that the pros use to win matches and that you can use by the time you finish watching this video.

The reason why serving strategies are so important is because having one, allows you to… 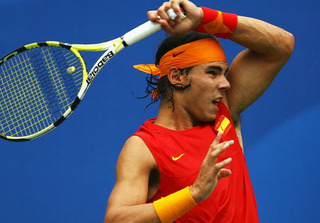 Do you ever wonder what to do with those high floaters in the middle of the court? I mean should you volley it in to be safe or whale away? Today I am going to show you what Rafa Nadal would do and how you can use this shot in your game.

So choice A is to volley it with a punch. Do you think Rafa would choose choice A? Maybe sometimes but most of the time he would…

The 2014 Australian Open I believe will be really good. The sad thing though this is probably the first year where I don't believe Roger Federer even has a shot. Now that he is number 6 in the world there is just too much fire power he would have to go through. On his…

There is something interesting going on in men's tennis lately on the ATP Tour. It seems like all the top players are picking up celebrity tennis coaches. First Andy Murray went out and got Ivan Lendl. Then Djokovic goes out and picks up Boris Becker. Now Federer follows suit and picks up Stephan Edberg?

http://www.youtube.com/watch?v=yzdQ1RxEqO8The question I need help with is does this matter?…

And the final thing to consider is…

The backhand return can be tricky for lots of tennis players to master. Most people end up hitting off the back leg and the ball pops up. This exercise will help you develop muscle memory that will have you moving forward through the ball. Enjoy.

Ever Wonder How Topspin Works?

Understanding how topspin works will hopefully help you get over your fear of going for your shots, especially when hitting your second serve with a continental grip. Watch this video for further explaination.

7 Reasons to Watch This

Hello all a number have watched my Free Webinar but for some reason some have not gotten around to it. If you take action I promise this will help your business.
Here are my top 7 reasons why you need to watch the Webinar if you are serious about growing your business.
1. 88% of people on the internet over the age of 14 year old browse for products and services online. …
Continue

What Every Tennis Pro Needs

As promised here ist the link to get access to the free webinar.   http://freewebinar.greedytennis.com/
Let me tell you why I created this free webinar. First of all, many of you have been very interested in the emails we have been sending out, but are a little confused on exactly what it is I can do for you.
This video clears that up for you and goes into great…
Continue

One mistake I used to make was to start making my plans and actions in the new year. I would find out year after year that my action steps were being implemented too little too late for them to be effective.
DON"T BE LIKE ME CLICK HERE
Finally, I wised up and started making my big plans for the upcoming year a couple of months before the new year was coming...make…
Continue

Take a look at how many people all over the world are using these platforms:
These are some really scary numbers if you are still operating with old school tactics.
Here are ways…
Continue

Just Add a Dash for the Perfect Slice

This is a fun video that demonstrates how to add the right amount of under spin to you slice forehand or backhand. The key is you don't want to add too much cut on your ball, which is what most club players try to do. This exaggerated cut motion results in a ball that floats too much and has no pace.

What you want to do is be…

Watching the Davis Cup this weekend was fun and it was great to see the US beat Switzerland. John Isner had the biggest win of his career and beat the legendary Roger Federer 4-6, 6-3, 7-6,6-2.

Can Novak Recover for the Final?

Novak into the Australian Open Final

Maybe the most physically demanding matches in the history of tennis. These two battled for nearly 5 hours and the quality of tennis was off the charts. Amazing shots, amazing gets, and tons of heart from both players.

Another classic match between Roger Federer and Rafael Nadal. If you are a Roger fan though it is the same old story close but no cigar. The two are so evenly matched and it really produces high drama scintillating tennis.

This match again had everything!!! Amazing points, huge momentum swings, and…

Here are my Picks for the Semi-Final Matches

Watch Video for my picks. Let me know what you think....

Who will win the Nadal Federer Match

Great day and the 2012 Australian Open Final!!! Kim Clisters shows her Australian fans that she still has some magic left as she takes out Caroline Wozniacki 6-3,7-6.
This puts Clisters in the Semi-Finals and sends Caroline into another press conference having to answer will she ever win a major? I…