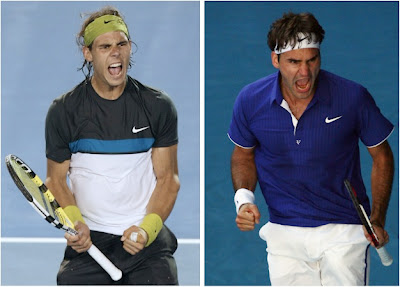 
The next chapter in this already legendary rivalry between top seed Rafael Nadal and second seeded Roger Federer is ready to be told.

In the pair's 19th career meeting, Rafa will be looking to win his first hard-court major title and sixth overall when he battles 3-time champ Roger Federer who will attempt to tie Pete Sampras' record of 14 career major titles in Sunday's Aussie Open final. Let's take a look...

How They Got Here: Rafa played his first five matches in blazing form, not dropping a single set on his way to the final four. But that streak ended when he met up with compatriot Fernando Verdasco in an epic semifinal slugfest that now sits as the longest match in Oz Open history. No one will soon forget the stirring images from this now-classic match including the joy and relief of Rafa's reaction after a painful double-fault on match point by Nando gave the 22-year old a 6-7 (4), 6-4, 7-6 (2), 6-7 (1), 6-4 victory.

Regal Rog also began the tourney relatively well but hit a major speed bump in his fourth rounder, coming back from 2 sets to none down to defeat Czech Tomas Berdych. In his semifinal match, Fed confronted an in-form, in-shape Andy Roddick but bested the American baller for the 16th time 6-2, 7-5, 7-5 to enter his fourth Oz Open final and fourth consecutive major final.

The last time these two met was in arguably the greatest tennis match ever played - the '08 Wimbledon final. It was the third consecutive meeting for the pair in the Wimby final but this time Rafa came out on top, earning his first Championship and stopping the Swiss stylist's streak of 5 consecutive titles at the All-England Club with a 6-4, 6-4, 6-7 (5), 6-7 (8), 9-7 win. 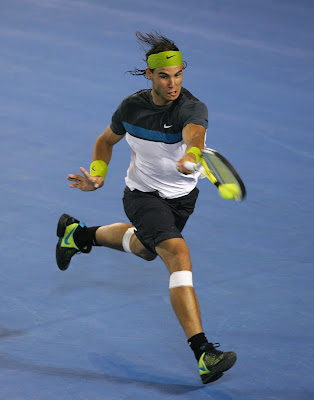 In his semifinal post-match presser, the Mallorcan Matador was asked about facing Fed again and what tactics he might employ:


Q. How exciting is it for you to finally play Federer in a Grand Slam on hard court? RAFAEL NADAL: Well, always is ‑ I don't know ‑ special play against Federer any match, no? You play another final of Grand Slam is more exciting, no?

Little bit unlucky. Don't know how I gonna be for the final. I gonna try my best for sure for recover my body and my physical performance. But, you know, after one match like this, the next days you feel much heavier, no?

But for sure for me is amazing play another final of Grand Slam. Here in Australia, the first one. Well, unlucky all the time is against the same: the best. For sure, I prefer another opponent. But that's makes big the sport, too, no, finals like this.

Q. Do you plan to play closer to the baseline against Federer? Tonight you had to run really a lot.

RAFAEL NADAL: Was tough to be more inside, no? What do you think? Did you see the speed of the ball or not (laughter)?

Q. I saw he was able to stay farther in front. 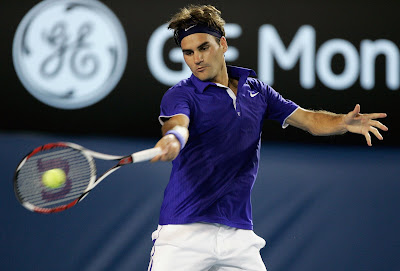 Fed was asked about Rafa's grueling 5-hour semifinal bout and if he thought now had an advantage in the final:


Q. You had a bit of trouble watching last night's match did you, or did you have to get back down here to do it? ROGER FEDERER: Well, I was practicing at the beginning of the match. It took a while, so I went for dinner and saw the end. It was really exciting. It was an unbelievable match.

Q. What did you think about? What was going through your mind as you were watching it?

ROGER FEDERER: Well, I mean, as I didn't see the whole thing, it was kind of difficult to judge. But you heard, you know, that Fernando was struggling with his leg, you know, at one stage, but then looked much better again.

But it was just good to see such a close contested match, I thought. In the end it was unfortunate it had to finish on a double fault, but I thought the quality was very good.

Q. It was one of the great ones. Does it make you feel that you've got more of that advantage now that you've had the extra 24 hours and Rafa has had to dig so deep through five hours?

ROGER FEDERER: Well, I mean, you could think that way, but I don't think it's really going to affect Rafa that much. He's had very easy matches going into this semifinal.

Okay, he has a day less. But, look, I mean, you got to be fit and recover from this kind of a match. I think he will, even though he took a while. His matches usually take longer than other matches because he takes his time out on the court. I don't think he will be really affected on Sunday.


Outlook: In full flight, Rafa would have more than enough game to topple The Fed in Oz. But after his grueling semifinal that ended in the early morning hours on Saturday and only a day to recover and get in some practice, will he be fit for the fight? Big question mark. But if anyone has the mental and physical strength to push the pain aside and pull through, it's Rafa. This time, however, it may be too much to ask. The top baller will need to pull ahead early (as he did at Wimby), keep the points short, hold his ground on the baseline, and step inside and attack when the opportunity hits. If he gets the first set or two, then game on.

For his part, Fed will be looking to lengthen the rallies, move Rafa side to side, and maybe throw in some drop shots to gauge the Spaniard's fitness early on. But the 13-time Grand Slammer is certainly the fresher of the two and will hold the advantage if they match gets to a fourth or fifth set. He'll still need to serve well, dictate with the forehand, and end points at the net in order to keep the World No.1 from gaining any momentum. Fed will be smart to stay aggressive and attack at every opportunity because even a weary Rafa will push himself to run for the fences.

However, with all that's on the line for Regal Rog coupled with a possibly-fatigued Rafa, we'll most likely looking at history in the making when he earns his second consecutive Grand Slam title and record-tying 14th career major in Oz.