Nalbandian’s Disqualification – and Five Others!

David Nalbandian’s disqualification from Sunday’s final of the AEGON Championships at Queen’s Club in London is, without question, one of the most unusual conclusions to a tennis match – and tennis tournament – in the history of the sport. Leading Marin Cilic 7-6, 3-4, the Argentine kicks a wooden advertising base surrounding the service linesman, breaking it and causing part of the sign to jam into the linesman’s shin, causing a bloody one-inch gash in his leg. Chair umpire Fergus Murphy immediately defaulted Nalbandian, awarding the match – and the title – to Cilic.  A video of the incident can be seen here: http://www.youtube.com/watch?v=kIsT_GPJXaI&feature=youtube_gdat... 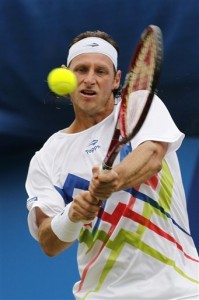 Where does Nalbandian’s tirade and episode rank in the annals of tennis history’s other famous disqualifications? Here are some to consider, taken from Randy Walker's book ON THIS DAY IN TENNIS HISTORY ($19.95, New Chapter Press, available here: http://www.amazon.com/This-Tennis-History-Day—Day/dp/0942257421/ref... (Keep in mind that the famous Serena Williams episode from the 2010 US Open against Kim Clijsters was technically a point penalty on match point and not a disqualification.) 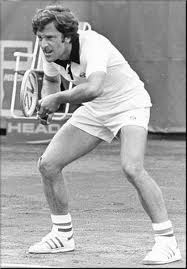 May 30, 1974 – Reigning Wimbledon champion Jan Kodes of Czechoslovakia shoves a linesman and is disqualified from his second round match with Italy’s Antonio Zugarelli at the Italian Championships in Rome. Trailing Zugarelli 5-4 in the third set – and only two points from defeat – Kodes shakes and shoves volunteer linesperson Alcide Rappi after Rappi calls his shot out. Kodes then walks off the court and is defaulted from the match. The Associated Press reports that Kodes leaves the court exclaiming “Thieves” to tournament officials and retreats to the dressing room where he erupts in tears. Says Kodes to the Associated Press of the call, “It was about two feet from the baseline. The chair umpire had no reason to follow the decision of the baseline man in such a case.” Zugarelli says after the match he believes that Kodes’ shot was good. Says Kodes of the shoving incident, “I guess I got excited. I feel terrible for what has happened, but you cannot go for pure robbery. I can take bad line calls, because you have them in all tournaments, but this was too much.” The ATP issues a statement the following day saying the situation was mishandled and calls for major tournaments to hire professional, salaried linespeople. “The ATP deplores the lack of fair play and professionalism that was evident in the incident involving the disqualification of Kodes. Although Kodes was clearly at fault when he pushed the official tournament referee and consequently deserved to be defaulted, ATP officials and players who witnessed the incident were of the unanimous opinion that the entire situation was mishandled.” 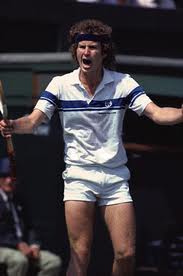 January 21, 1990 – Saying “I don’t really have anyone to blame but myself,” John McEnroe becomes the first player in 27 years to be tossed out of a major tennis tournament for misconduct. Leading Sweden’s Mikael Pernfors 6-1, 4-6, 7-5, 2-4 in the round of 16 a the Australian Open, McEnroe is disqualified by chair umpire Gerry Armstrong after breaking a racquet and flurry of four-letter words. “This is like a long story that culminates in me getting defaulted in a big tournament,” McEnroe says in the post-match press conference. “I mean, I guess it was bound to happen. It’s too bad. I don’t feel good about it, but I can’t say that I’m totally surprised.” McEnroe is fined $6,500 for behavior in the match – $5,000 for racquet abuse, $500 for verbal abuse and $1,000 for the default. The previous disqualification came in 1963 when Colombian-born Spaniard Willie Alvarez is defaulted out of the French Championships. May 30, 1995 – Carsten Arriens of Germany becomes only the second player – after John McEnroe – to be disqualified from a major event in the Open era. After splitting the first two sets with New Zealand’s Brett Steven, the 131-ranked Arriens first throws his racquet from the baseline to the net, for which he is warned by the chair umpire Andreas Egli. He then picks the racquet and heaves it towards his chair, but he hits the service linesman on the ankle. Egli then calls for the tournament referee, who agrees that Arriens should be disqualified. McEnroe’s abuse of officials and foul language in his 1990 Australian Open match with Mikael Pernfors necessitates his disqualification. 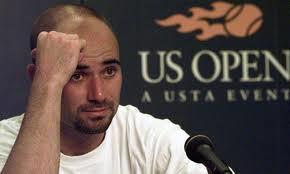 August 14, 1996 – Andre Agassi is disqualified from a professional match for the first and only time in his career when he curses at chair umpire Dana Loconto and hits a ball into the stands during a second-round match against Daniel Nestor at the RCA Championships in Indianapolis. After Agassi wins the first set easily 6-1, he is broken in the fifth game of the second set and slams a ball into the stands. Loconto issues a ball abuse warning to Agassi and Agassi reacts by shouting an expletive at Loconto. ATP supervisor Mark Darby is called to the court, speaks with both Loconto and Agassi, and then instructs Loconto to default Agassi. Fans, angered at the disqualification, throw paper and water bottles on the court. 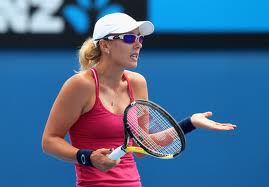 July 17, 2007 – Anastasia Rodionova of Russia becomes only the second player in the history of the WTA Tour to be disqualified from a match when she is defaulted from her match with Germany’s Angelique Kerber in the first round of the Cincinnati Open. Kerber leads Rodionova 4-6, 6-4, 1-0 when the Russian slammed a ball at fans cheering for her opponent.  Tournament referee Williams Coffey immediately defaults Rodionova for unsportsmanlike conduct.  The only other player to be disqualified from a match was Irina Spirlea who was defaulted for abusive language during a match in Palermo, Italy in 1996.  Says Rodionova, “I’m shocked. I still don’t understand why they defaulted me. I’m really upset.  I had no warning. I didn’t hit the ball at anybody. I didn’t swear at anybody. I didn’t throw my racquet.”

I remember the Mac and Agassi disqualifications but I find the Kodes one very intriguing. Don't know too much about him.