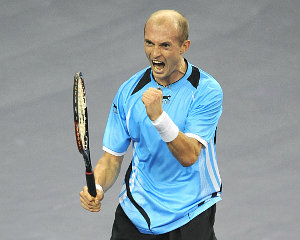 It was clear from the off that the Scot was feeling the after effects of his epic match with Roger Federer less than 24 hours earlier. The Russian broke immediately and signs were ominous. However, Murray immediately broke back and the match went with serve until Davydenko broke at 5-5, before serving out to take the set 7-5.

The second set was more comprehensive for the Russian. He was striking the ball beautfully, taking it early and keeping Murray pegged behind the baseline. The tired Scot had no answer to the Russian's relentless strokes and eventually lost the set 6-2. And with that went Murray's dream of lifting the Tennis Master's Cup for 2008.

I'm disappointed but I thought Davydenko was superb and Andy a little tired. Looking forward to the new season already!!

Comment by Meags on November 30, 2008 at 6:08am
I think Andy can really learn from this......
When any of the top players play Davydenko if they show confidence they usually walk the game, if like Andy they show they are tired and huff and puff the russian will run the legs off you.
The two games with Andy and Nole show this.
I'm disappointed in Murray a little, you wouldnt see fed moping about. I felt if he came out for the game livelier and showed his confidence he's of had less problems.
Still it was good to see Nole win and looking at the top 8 for next year looks really strong with Tsonga, Simon and Del Potro all pushing the top 5 strongly. Im excited........

Comment by Jazz Burks on November 26, 2008 at 10:42pm
So the question is ... Should Murray have "taken his foot off of the gas" and let Federer win that RR match? If he was tired from that match and couldn't grind it out against Davydenko was it all worth it? You were 3-0 in the round robin but you bombed out in the SF, should he have shut it down and let Fed win? I don't know how it would have shaken out and Murray might have had to go through both Nole and Fed to win since Murray and Fed would have been 2-1. However the confidence gained by once again defeating the number 2 player in the world maybe a larger benefit in the long run.

Comment by Mark / The Mayor on November 16, 2008 at 9:48am
ATP World No. 3 Novak Djokovic was in devastating form as he capped a huge season by racing to his first Tennis Masters Cup title with a 6-1, 7-5 victory over Nikolay Davydenko in Shanghai on Sunday.

So Djokovic finishes the year the way he started it. He beat Tsonga in the Aussie final and beat "the hardest working man in tennis" for the Masters Cup. I wonder how his next AO will go.

Comment by Meags on November 16, 2008 at 3:11am
Djokovic in 3 tight sets against Simon. Djok winning final at mo easily!!

Comment by Mark / The Mayor on November 15, 2008 at 9:14pm
Excellent post. I just missed seeing this today. I still have no idea what time these matches happen. And who won the other semi between Simon and Djokovic?
M

although i suppose it might have been a little too much to ask, given that phenomenal 3rd set yesterday against Federer.