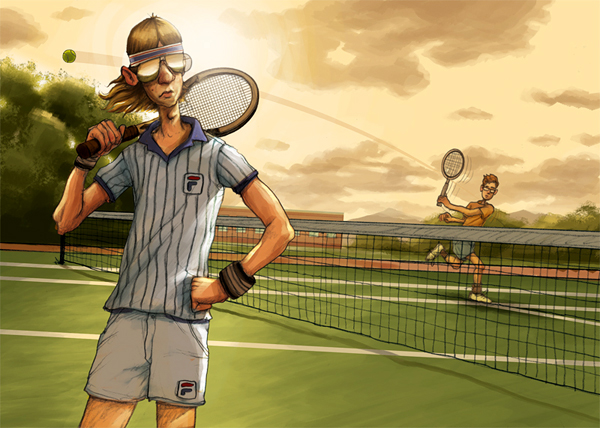 Champions have a way of turning a losing match situation around, and one of the ways of doing that is by switching strategy. No use sticking to your most “comfortable” game plan when you are getting outplayed. While pros can switch from counter punching, to serve and volleying, to defender, to aggressor, very few recreational players take time to have another decent alternative style or strategy at the least.

4. Skimp on your equipment wisely:

Pros take 2-3 of everything onto the court and then 5+ racquets! Tennis comes with budgetary limitations to some, understandably, but having a backup racquet with the same string job outweighs having 2 of the latest Tsonga T-shirts. At the least, 2 racquets, a good pair of shoes, and a water bottle should accompany you to the court every time. A free breast cancer awareness shirt on the court is not only noble, but also it has never resulted in a loss for anybody.

3. Do not get absorbed trying to fix your least favourite shot:

This is synonymous to #8 because it encourages you to sharpen your best artillery, yet different. Although it is OK for Roger to tweak his backhand, it will be hard to match the same thundering deliveries he commands with his forehand. He has had an entire career to do so and it hasn’t happened, so aiming for reliability is sufficient. In the meantime, a strong serve or forehand for example can make it harder for your opponents to find your weaker backhand. After all, even weaker grooved shots “get in the zone” sometimes.

2. Every match played is a lesson taken:

Take something about your opponent’s game as a point of note for the next time you play them. Like us, week in, week out, pros play the same players. Even for routine winners, if you are not adapting and growing, everyone else is catching up. I make some of my more competitive clients go as far as taking notes after each match.

1. Winning or losing, enjoy the sport:

Every match is characterized by engaging, expressive gestures and emotions from both the champion and the runner-up. The excitement, satisfaction, and fulfillment, even for the few minutes before or after your day at the office, of tennis, is undeniable.

“My greatest high was to hit a ball well, to try to do it perfectly, to try different things with my shots, whether they came off or not. I can think back to matches I lost where I played one or two points perfectly, and that gave me a thrill. The most exciting match I ever played was the 1974 US Open against Billie Jean, and I lost.” Evonne Goolagong

Thanks Tim, #3 is in fact encouraging players to spend more time in practice making sure that their strengths are always on point. So this IS during practice rather than a match. If you are working on technique during the match you may be in serious trouble already!

The picture is from here the guy is a great Illustrator I admire and I am a huge fan!

Love the picture and all very good tips. Too late to work on a shot during a match. But then, that's why you should work on the least favorite shot during practice and risk losing in bundles until it is right.