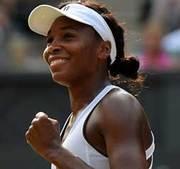 This group is for the many venus william fans around the globe. Join Now!!

The seven-times grand slam champion pulled up with what appeared to be a groin strain after lunging for a return with the German leading by a game and 30-0 in Melbourne.

“It was just too painful to move,” fourth seed Williams told reporters after aggravating an injury that troubled her in the previous round.

“The last 48 hours I did as much pain management and recovery that I could. A lot times you get this adrenaline that blocks pain. I just didn’t get enough of that today.”

Williams, a Melbourne finalist in 2003, strained a muscle in the same area during her second round victory over Czech Sandra Zahlavova on Wednesday.

Her retirement leaves a grand slam without an American woman in the last 16 for only the fourth time, the last time coming at the French Open in 2008.

Petkovic moves on to face former champion Maria Sharapova in the fourth round.

“It’s super disappointing,” said Williams. “This is just not how I envisioned my Australian Open being. I’ve never had to retire from a grand slam.

“I was just hoping for some magic that I could recover. I’m just going to focus on getting healthy and coming back,” added the former world number one, who last won a major at Wimbledon in 2008.

“I love tennis and I’ve got a lot of great tennis in me. I love my job, so (there’s) no end in sight.

Petkovic had mixed feelings after going through, and earning A$38,500—the difference between winning and losing in the third round—for her four minutes on court.

“I feel very weird about tonight,” said the German, who matched her fourth round appearance at last year’s U.S. Open.

“Obviously I’m one round further which is great. But on the other hand I really felt great today. I really wanted to give it a real go.”

Dear friends,You all have been a great support through the years and hope this email finds you well!I’m writing to share the exciting news of what’s to come for Modern Tennis Methodology this year!…Continue

Tennis is much easier than you think

For most people, tennis being easy is a difficult concept to agree with. So let me ask you a few questions:…Continue

Tracking the Ball     Track the ball with your playing hand as if you were trying to catch it.Restrain yourself from hitting too early by resting the racquet throat in your other hand.When the ball…Continue

How can anyone respect the Williams sisters when they continue to refuse to play in Indian Wells when tour officials have flat out told them they must play at this venue.  Are they really above…Continue

is The next Venus willaims ?

Is this the next Venus Williams cast your vote@http://www.teamsimmonstennis.com/Videos.htmlContinue

Thanks for adding me to your group Continue

Lets see how well you know Venus Williams! Hope everyone participates! Lets have some fun! Each correct answer worth 5 pts! Lets Have Fun!1. Venus formerly endorsed _________, who supplied her with…Continue

About The Book With Come to Win, Venus Williams, the multiple Grand Slam tennis champion and entrepreneur, along with an esteemed group of business leaders, politicians, and acclaimed artists, serves…Continue

As I am sure you already know, our girl, Venus Williams, not only lost her singles quarter final but was also knocked out of the doubles with her sister, Serena, this week.While I am sure she is very…Continue

It gives me one of the greatest feelings in a long time to know that Venus Williams will official be ranked #2 in the world come next week when the new rankings are released. Venus defeated Italy…Continue

You need to be a member of Venus Williams Fans to add comments!

Venus Williams is great for tennis, but she actively engages in life in so many other ways.

Venus is back! And today she beat the last woman she faced when she was injured during the Australian Open.  (See article below.)

Comment by Myiesha Simmons on November 7, 2010 at 11:23pm
http://www.youtube.com/watch?v=pgNu1ZjKoeM
check me out on Cal-Hi sports

Comment by Wesley Etheridge on August 12, 2010 at 12:02pm
Venus also tweeted recently that she is finishing up her interior design degree so it is no wonder that she has not played much tennis since Wimbledon -- and has dropped to #4 in the world.

Comment by Jae on August 12, 2010 at 11:52am
Im soo ready to see venus back on the courts. It seems like its been forever but im sure she will be ready to go. Hopefully she does not re-injure her knee. I want her to be 100% at the US Open.

Comment by Wesley Etheridge on August 12, 2010 at 11:10am
While Venus had to withdraw from the tournament in Cincinnati, she will participate in the Rogers Cup in Montreal, Canada, from Saturday, August 14, 2010 to Sunday, August 22, 2010.

Comment by Jae on July 2, 2010 at 7:44am
Hopefully she can come back stronger during hard court season! I wanna see an all williams final at the us open, its been a long time!