+ TUESDAY NETCORDS: Vince has nothing on Nalby's mustached belly bump - or does he? 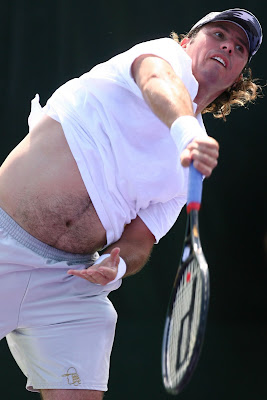 * Bobby Reynolds gives us the low down on the un-glamorous life of a lower-ranked baller including having to fly around the world in coach. Egads - coach?! Talk about slumming. Good thing I chose blogging. [NY Times]

* Tennis is the fastest growing sport in the U.S. among traditional sports. *faints* [USTA]

* Which rising lady baller said the following: If people spend some time with me they call me crazy, but in a good way. I paint my nails every three days. I have my nail polish with me – about 20 bottles of nail polish. I like shopping also. [Tennishead]