The Secret of Off-Center Hits 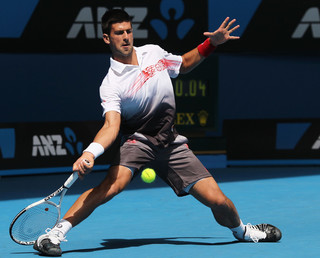 Most players have the goal of hitting the ball on the center of the racquet.

They succeed unless there is a difficult situation.
Why?  Because that is their intention, their goal.

It is also an idea backed up by most coaches, not quite observant of this fleeting fact: Top pros hit topspin strokes quite below the center.

How is this?  Do they know that that’s where they hit?

Revelation: they may not know consciously that they are doing that. What happens is that with so much constant practice they get a certain feel of ease and more control on hitting below the center and they adopt it instinctively.

I happen to coach that purposefully.  I have seen a number of pros have bad days without realizing why.  They fight their instinct, thinking that it is better to hit on the center.  Realize that the torque of hitting below the center keeps the racquet closed and the ball does not fly long.  You also get more topspin and you don’t need to grip the racquet tight.

Tim, it's not 5 hundreds of a second, it's 5 thousands of a second, 10 times smaller. But if you put your attention there you can see it, sometimes very clearly.

The Nadal practice session is not good for spin analysis. It was clear to me Rafa was hitting flatter than he usually does. He was also hitting harder than any other pro in the practice courts. But as soon as he played his match, he went back to his usual heavy topspin.

I read an interesting article Borg wrote on topspin for a newspaper.He describes what advantages he had over Connors in terms of technique. He writes about two approaches to topspin, and that he preferred to use fast swing speed to achieve it. He also mentions Tilden, Laver and Budge at the start of the article.

In any case, Oscar, how are you able to see where the ball is struck on the stringbed without the use of high speed photography? My eyes certainly cannot pick up what happens in 5 hundredths of a second.

Tim. Regarding practice, it is not the same as in a match, when players hit harder but safer, thus needing to use the bottom of the racquet more. But measure it and let me know the results. Then we'll watch the US Open on TV this year and measure it again.

Thank you, Tim. Great data. Spin increases exponentially. I new it from observing and from practice. You confirmed it scientifically (taken from te first graph, with no weights added). It also adds to your control. There is enough power at the top level of the game. You want control!

I mentioned before that it isn't a new thing, players were doing it a long time ago. A picture is not the same as a film, but here is a the top topspinner of his time. Was his impact here below the center? I once asked Jack Kramer, and he verified Tilden hit tons of topspin, and that he (Jack) hit some too. 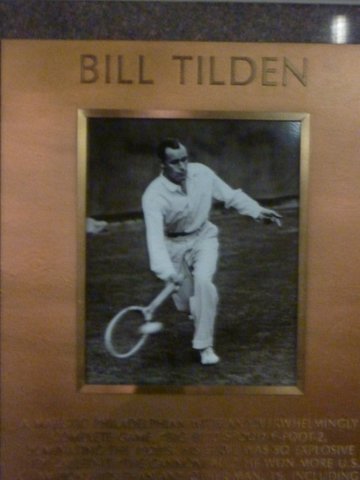 I do have HD footage I took of Nadal's practice session at 2012 BNP Paribas at close range, especially his forehand. I will let you know what I find.

Haha! There's little chance of me traveling to the US Open to do such a thing. But here's an article in your favor of what you teach, Oscar: http://twu.tennis-warehouse.com/learning_center/location.php Figure 3 — Impact location 22 inches from the handle butt and 2 inches above and below the long axis.

Racquet Without Weight. Upon an informal survey at Tennis Warehouse, most players guessed that if there were a difference in spin due to impact location that high impacts would produce more spin. The intuitive bias and explanation was simply that there is more room for the racquet to brush up behind the ball.

The results were just the opposite. As Figure 4 shows, for the racquet without additional weights attached, impacts below the longitudinal axis produce more topspin than impacts in the middle or above the axis. In fact, low impacts had an average of 53% more topspin than high impacts. This result was astonishing enough that the experiment was performed four separate times using slightly different setups, but with the same results each time. Figure 4 — Rebound topspin at high, middle and low impact locations without any peripheral masses added to the racquet.

These results are explained in the "Analysis and Discussion" section below. Figure 5 — Rebound topspin at high, middle and low impact locations with peripheral 100-gram masses added to the racquet at 3 and 9 o'clock.

Racquet With Weight at 1 and 11 o'clock. Changing the weight location to 1 and 11 o'clock produced results that were more similar with the racquet without weights. The low impact had 35% more spin than the high impact, as shown in Figure 6. There was more spin at all locations with extra weight than without. Figure 6 — Rebound topspin at high, middle and low impact locations with peripheral 100 gram masses added to the racquet at 1 and 11 o'clock towards the tip.

Combined Results. Figure 7 shows the graph of the combined results. Figure 7 — Rebound topspin at high, middle and low impact locations with and without peripheral 100 gram masses added to the racquet.

Rather than guessing on what happened in a photo, look for yourself. You have the whole US Open to look at these players hit the ball. Look especially when they are having a good day. Then I'll be very happy to look at what you report.

To me it's obvious that they try for the center line and make it often and miss it the rest of time to a greater or a lesser degree a little above or a little below.

The one unexpected result was that there was a tendency, especially with Djok to hit on the center line but closer out to the tip of the racket. Very few balls were hit closer to the handle by any of the three.
http://tt.tennis-warehouse.com/showthread.php?t=412114

One explanation to these "dead in the center or above" photos is that this is the moment they've decided to flatten out the shot and hit less topspin.

The other explanation is that there already is plenty of torque from their stroke mechanics, it matters less if they hit off center or not. They will still achieve plenty of RPMs. But it is preferable to hit somewhere in the center to prevent shanking.