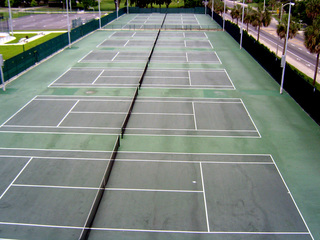 No one will deny that Rafael Nadal has had a difficult year thus far.
He won the Australian Open at the start of the season, continuing a magical run through the 2008 season, however that seems like a decade ago now (doesn't it?). Beyond the Australian Open and leading up to the French, Nadal was simply being "Nadal". Winning five titles out of ten tries, and making people wonder if Federer was ever going to get a beat back on the Spaniard.

Things changed drastically however one sunny afternoon in Madrid, when Federer looking more like his usual self drilled Nadal in the final 6-4, 6-3. The round before, Nadal in spectacular fashion barely managed to get through Djokovic in what will end up being one of the better 2009 non-slam matches of the year.

With that loss, Nadal walked into the French Open with reduced momentum, an apparent knee issue, and some personal family related issues. Of course, those personal issues didn't surface all of a sudden, but that is none of our business, and we'll leave it at that.

At Nadal's legendary backyard (Rolland Garros), people refused to believe that the master of clay could lose. Why? Because he hadn't lost at the French Open. He was virtually unbeatable going into the 2009 French Open, that is, until some Swedish rebel played the match of his life and dismantled the Spaniard in legendary fashion. It was the upset of all upsets at the French, and while we didn't witness "Roger-like tears" from Nadal, it had to of hurt...Badly.

Nadal then went into an injury time-out and only just returned to the competitive scene via the Montreal Masters. He went on to lose to Del Potro in the quarters, and then his #2 ranking to Andy Murray. No coincedence that he lost to a future top #3 player, and then his ranking to quite possibly the next #1 player in the world.

It has indeed been a difficult year for Nadal, however here he has an opportunity to fight like hell in a city where fighting like hell earns you respect and honor. New York will get behind the underdog and Rafa can use this to his advantage to slide through the first week and deep into the second. He is however not the #1 seed, or even the #2 seed here, he's #3. How the draw plays out for him will be revealed very shortly, and he may need some ol' "luck of the draw" on his side.

Anything shy of the semi-finals in my mind though is going to be tough for Rafa. He MUST play up to his seed in order to walk away here with anything positive. Yes, I know he is just returning from a significant injury, but this isn't Roger Federer. Nadal has a significantly smaller window of opportunity to haul majors because he plays like no other man out there, with sheer reckless abandon. His body won't survive into his 30's, he has maybe 3-4 years (if lucky) before either a) The body says good-night; or b) Del Potro, Murray and the rest of the upstarts take over tennis for good.

I also believe anything other than Rafa or Roger winning the U.S. Open will be an added hurdle for Rafael to overcome. Federer wins (no matter what happens to Nadal), and he has to feel some comfort that the universe that he knows still holds somewhat true. Throw in Murray, Tsonga, Del Potro, Roddick, or anyone else, and things change. The universe changes (again). More guys, with more confidence. Deeper draws, tighter rankings, and ultimately improved competition for Nadal to deal with.

The 2009 edition of the U.S. Open could truly be a legendary tournament with so many men legitimately having a shot here. The field is so deep these days, with so many story lines, so many characters.

It's getting close folks, if you are less than ten hours away from New York, you had better start planning the road trip now!