Murray on first win in Shanghai 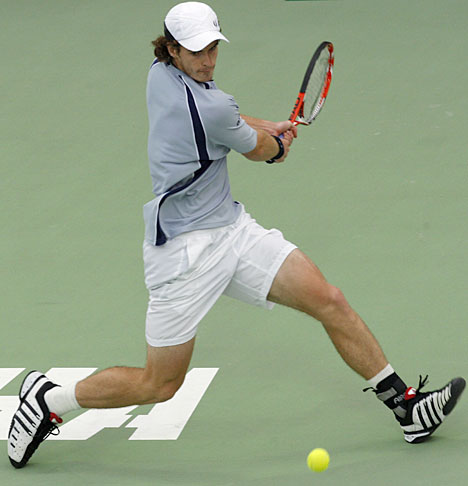 Apart from the second set, which was kind of weird, the rest of it looked pretty controlled domination.

Yeah. I hit the ball well for most of the match. I just didn't serve well in the second set. I had a chance to break him right at the start of the second - If I'd done that, then maybe second set would have been a different story. But, yeah, I played well.

Given it's your first experience of this event, how did you actually find it? You looked a trifle weary at the end. Would that be a fair summing up?

Yeah, I'm tired. I felt like I played well. My legs don't quite have the snap in them that they did a few months ago. I'll try and do my best to recover for the next match.

What is the surface and the conditions like out there?

Pretty fair. Because of humidity the ball doesn't move particularly fast. But the court takes the topspin well. If you slice, it stays low. The flat shots shoot through a little bit. I mean, it's a pretty fair surface, I think.

Is it fair to say with Federer obviously losing tonight, struggling a little bit, that your group's pretty wide open?

Well, the winner of my match with Simon is going to go through to the semis. I guess the chances of me qualifying have gone up pretty significantly after winning the match today. In terms of winning it, you know, there's a good chance I might still have to win two more matches to do that. But to qualify, yeah, it's probably gonna be slightly easier than if I'd lost today and if Federer had won.

Would you expect a harder match against Simon than you had in Madrid? He was pretty tired after some really long matches there, wasn't he?

Yeah, he was. He was also hitting shots that would suggest he had obviously a lot of confidence. He's going to be the same, I'm sure, in a couple of days. I don't know. He's a very good player. If he plays well it's gonna be a very tough match. If I play badly, there's a good chance I'll lose.

During the past few months there are some very good comments that you might win a Grand Slam in 2009 by McEnroe and Bjorn Borg as well. How do you take care of your own mind under those appreciations to perform on a very relaxed level on the court?

Yeah, it's nice to hear those things from two of the greatest players ever. But you still have to work very hard. If I want to win a Grand Slam I'm going to have to work even harder than I did this year, improve my game, then there's a chance I'll do it. But I'm not gonna say for sure that I'll win a Grand Slam next year.

You are not concerned at all about the Davis Cup final, but I would like to know your opinion, who is your favorite? What could be the key factor?

It depends what the court's like. If the court's fast, I think it's better for Argentina. If it's like this week, I think that's better for Spain. I'd expect Nadal to win at least one of his singles matches. Then the doubles I think will be very important. I think Spain are probably the slight favorites for the doubles. It depends a lot on the court surface. But it will be a very close match.

Comment by Mark / The Mayor on November 14, 2008 at 10:57pm
And he just beat Federer again. Too bad he couldn't do it at the USO. I think he was just too young. Next time, it should happen. It's really amazing how Andy has come on sooo strong. Quickly, he went from someone with a lot of promise to a real contender as the best tennis player of the moment. So now he gets, who? Del Potro in the semis?
M

Comment by Mark / The Mayor on November 12, 2008 at 1:24pm
Well, he beat Simon fairly easily - so now he gets to play fed with NO pressure on himself. He said he will try to knock roger out right now and that he is looking forward to the match. Meanwhile, fed has all sorts of pressure. He has to win to get to the semis.... drama.