Ivan Lendl: The Most Underrated Tennis Champion in History 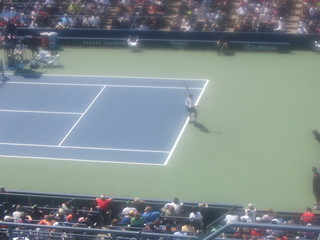 April 2009 Post - The Tennis News Authority
For those of us who watched tennis during the 80's, Ivan Lendl was always there, always a part of the big stage, and always in the thick of things.

Whether Lendl was taking strides across the lawn at Wimbledon to hit a forehand winner past Boris Becker, or dismantling John McEnroe at the French Open to hand him his most influential loss, you could always expect the same thing out of him. Mental toughness, solid strokes, and sawdust in the pocket.

He managed the role of villain against the more popular player with a mental toughness I refuse to believe exists today. He could literally shut out a crowd and play his game with a relatively calm demeanor (and win!).

What is even more amazing is that Lendl managed to reach the finals of a Grand Slam 19 times. 19 times Lendl went into a major final with a shot to grab another trophy. 8 times he consecutively went into the U.S Open final! It's a staggering statistic to think that Ivan Lendl certainly had the potential to simply be the greatest of all time (GOAT). Give him a Wimbledon, and while he doesn't hit double digits in slams, I add him to the conversation of the greatest. To reflect on a potential, a real opportunity to hold 19 Slams however is simply amazing.

With the exception of Wimbledon (losing twice in the final), Ivan Lendl's career is as polished as any champion of the past.

...And 94 ATP Titles, 2nd highest total ever to Connors who blew the field away with his record of 109 tournaments won (Consider Federer is barely half way to Connors with 57).

Ivan Lendl truly was one of the dominant players in his era with that trademark running forehand, an all-around powerful game, and the ability to never bow out early. Maybe he should be included in the discussions regarding the all-time greats.

Today Lendl is a fantastic golfer and works with his daughters (3 of 5) developing their game for the future. His other daughters focusing on horse events. Married for for nearly 20 years, he is clearly a family man in tennis retirement.

I don't imagine Ivan spending much time thinking about those Wimbledon losses in '86 & '87, as he's clearly moved on to bigger and better things. He will certainly always be remembered in tennis circles for his remarkable consistency, dominant play, and ultimately a legendary career.

Comment by Mark Oskar on May 12, 2009 at 3:58pm
I still get amazed by his statistics!
Really believe he was mere points from firmly placing himself in the top 3-4 of all time.