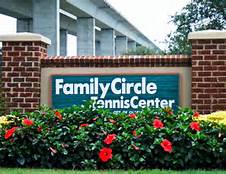 Well, the forecast for Sunday, day of the Family Circle Cup finals, looked great if one attending a pro tennis tournament suddenly took to the idea of staying in and watching TV, playing board games or whatever adults (without trailing critters) do when they finally have some us time alone in a condo or hotel in Charleston, SC or any other coastal get-away.

"Room service, bring us some wine please and tell housekeeping to just drop off some towels by our door."

The forecast called for temperatures in the low 60s and a 60% chance of rain for the morning, followed by 80% for the remainder. I woke up at 5a to get some time on the blog and other than it being 10 degrees cooler at 8a (quite odd), not much of the forecast came to fruition.

First up was the doubles final match (Garrigues and Shvedova def. Chan and Chan 7-6, 6-2), which I saw all of 30 minutes of (no blogs or tweets from us on this one - and I love watching double) as I was down in the stadium concourse and on the facility grounds having a blast meeting fans (not mine, have you), families and necessarily (more in a moment) getting to know more of the event staff.

I believe umbrellas or some head cover, if one were to stay dry, was essential for all of 20 or 30 minutes sometime during the doubles finals.

I saw some ball girls milling around, giggling and stuff like (You know, like.) that and I decided they may need to change the look of their uniform. Not really, but I had plenty of spare Soffe shorts (emblazoned with Otto, Pete Toad's friend) and thought perhaps I should not let these go to waist (Yes. I just did that.). Who loves Soffe cheer shorts? Teenager girls, twenty-somethings and even some youthful (open-minded) whatever-something women.

Poof, who appears? Jo, Volunteer Coordinator and the gentleman in charge of the ballperson staff. She agreed to give our shorts to the female staff-of-the-day, about 10 or 15, and I was off to the parked-nearer-than-legal-somewhat (research pays well) car to retrieve some more stash.

We obviously understood they could not wear them during the event, but we hope they enjoy them when they get a chance.

Other than checking every new bag of whatever I was bringing in, the gate staff had given up on asking for any proof of anything from me. They were a wonderful bunch and we (them included) always had some wit waiting as I re-entered about ten times.

I had to get back to my seat before the Singles Finals and Pam Shriver (the one who leapt over me on Saturday, just before watching the ESPN pre-match coverage) was preparing to go on-air. She is now the ecstatic and proud (I'm quite certain) owner of two Soffe shorts by 3rdToad Tennis. I know she will thank us by playing an exhibition match in them (the shorts) within the next few weeks with a top pro. We're waiting for the heads-up phone call.

Well I had to get to my seat to see and cover (not as much as usual - my bad) the singles final match (Andrea Petkovic def. Jana Cepelova 7-6, 6-2). Our tennis fan bethren in the stadium was pretty much like the day before, plus a whole lot more - not as much as expected, but good to see in spite of the weather forecast and the gloomy skies.

The match was great to watch and the crowd was into it, but, as usual, only during the critical moments or games. Hey, that's expected, or, more so realized over the last few decades.

Well, you know the outcome, and if you watched the match, you may have realized there's much more going on here than just the level of play of both players, the competition and the results.

There are two outstanding elements of this match, the tournament: The value of Family Circle Cup to Women's Tennis and Andrea Petkovic (not shorting her opponent Jana Cepelova or any other, by any means).

After the trophy ceremony, we headed down to the main grounds and a 3rdToad Tennis staff member mentioned gaining Petkovic's attention after her post-match ESPN interview and I (the often aggressive promoter) said, "That's gonna be tough. I'm heading to the gate to meet a few last fans"

So, who was the first one at the bottom of the stairs off of the ESPN platform? The staff member. And, Petkovic signed her top - it wasn't a t-shirt from Cheap Shirts R Us. But, okay. Petkovic should be getting off her plane in Germany in a pair of our shorts (as if that would happen). But no, I decided to do something else. Note to self (same note, repeated again): Arm your staff with what they need when they take initiative, particularly when it cost you nothing.

Prizes are available for our coverage of Family Circle Cup until Tuesday, April 8. Check out some of the prize winners and submit your own photos to win prizes at Pete's Tennis Press Pics.