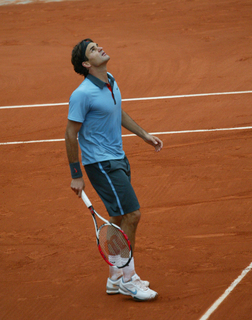 Rafael Nadal, Novak Djokovic, Andy Murray and Juan Martin del Potro are superb performers, but Roger, technically, is still the best player that ever lived, while Serena is his female counterpart.

I had the privilege to practice or compete with several generation players, from Pancho Gonzalez, Rod Laver, to John Newcombe and more, and coach Guga Kuerten and Bjorn Borg for his second comeback. None were as complete and as gifted as Roger. He has a new dimension of efficiency and natural use of the body for every tennis task.

I would venture that if he can get rid of a few misconceptions that have impaired his timing and strokes, he could be, in 2014, on the driver's seat once more.

And for yourself, keep this in mind:

How does the body work best through any stroke? Actually, it is with a lift, not by staying down like the fables of old. Even on modern volleys, the body goes up while the arm strikes down and across with a stop. Conventional coaching differs: "Stay down", "Follow the ball". It has many misconceptions, in fact more than 20 trite ideas that make tennis a much more difficult sport than it actually is. More at:
http://tennisteacher.com/Secrets.html and http://tennisteacher.com/eBook.html

He is close, Tim, but he needs to address more directly what I describe in my article. Read it again carefully.

the level of game displayed by federer in last two tournaments before the world tour final is phenomenal, currently only jokovick n nadal are playing slightly better than him..good luck federer as "many little johny wants to see u play"