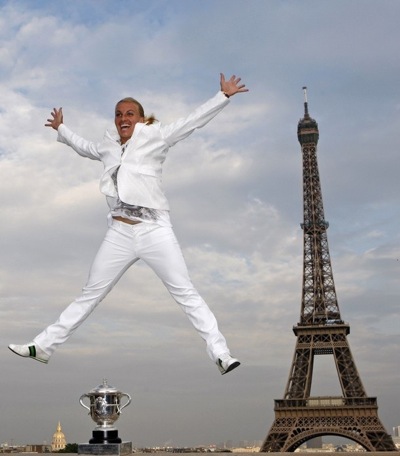 “I’m sorry I played better than you.” Svetlana Kuznetsova told Dinara Safina on the awards podium today after beating her 6-4, 6-2 in the French Open final. It may have come out wrong, but I think Kuzy summed it up best.

Forget the Safina Show for a second (the “Battle of the Real No. 1s”, the famous big brother, the too-intense coach) and say it with me: Svetlana Kuznetsova played awesome tennis today and all-tournament long.

She demonstrated in the quarters that she could out-hit and out-fight Serena Williams. She showed in the semis that she could handle the pressure against a game challenger, Sam Stosur. And today in the final, she proved that she is more talented and more mature than No. 1 ranked Dinara Safina.

I watched her today and thought: wow, what a forehand, what great movement, what impressive variety. She met Safina’s power and flummoxed her with net play, drop shots and mental toughness.

There’s a reason Roger Federer has called her his favorite female player. I’ve always enjoyed her game, too, but was confused that she couldn’t put it together. As Mary Carillo said before the tournament: “I keep waiting for her to decide for herself. . .what kind of tennis player she wants to be.”

Kuzy’s made her choice. Svetlana Kuznetsova is going to be a super talented, super dedicated and super match tough super woman. Oh, and she’s also super nice and super funny, but these two qualities were never in doubt.

In her post-match press conference she mentioned talking to Roger Federer at the Olympics last year, and asking him for advice on how to move forward in her career. She took his words to heart: “You can only depend on yourself.”

Which brings us to Dinara Safina, the woman who can’t depend on herself. It was painful watching her beg Big Bad Boss-Daddy, Zeljko Krajan, for help during this match. No, she wasn’t asking for tactical advice (though I do wish she’d received a warning from the umpire - it might have helped her!) But there’s no doubt she needed her coach in an immediate, visceral way.

“Why am I such a chicken?” she asked him during the second set.

If only Marat had been in the stands, instead of that glowering coach of hers. She would have looked up at her impassive, unimpressed brother and got the answer she needed: “I’m not a chicken, I’m Dinara Safina.“

So while we still don’t know who the “Real No. 1″ is, we do know who it isn’t. A real champion believes in herself, and doesn’t need anyone (except maybe Roger Federer) to tell her how it’s done.

Comment by Mark / The Mayor on October 15, 2009 at 11:41pm
Hey FreakyFrites, Check out this helpful info about copyright - crazy story, but it is all true. Let me know if you need any help working the Flickr pics with Creative Commons. Apparently, it can be a sticky situation so be careful out there! Please take down any photos on Tennisopolis that you are uncertain about (and definitely leave the blogs up though - we love them.)
M