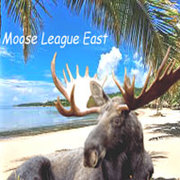 Based on the original Moose League, we meet and grow as has been done before, beginning over 30 years ago.

All levels of play are welcome and we play a four-game set format.

The following holds true and without exception (except where otherwise indicated as an exception, which is actually quite often) to be the rules, guidelines and constitution as established back some while ago (circa 1958 - wood rackets) by the founder.

All minor infractions are reviewed by a committee which we don't truly have and major infractions, such as being an ass constantly, will not be reviewed as you will recognize the disdain over and over again as you enter the courts after repeated offenses not covered in the Moose League (East) Constitution.

·         The player match up is usually established by Moose (or Adjunct) initially and may be adjusted at anytime as the clock ticks by. This may vary based on the number of courts available, when a player arrives, other factors or whatever hallucinations Moose (or Adjunct) may be experiencing at the time. The intent is to ensure that no two players play together more than once unless it is unavoidable, i.e. a small turnout, play going into three or four hours, more hallucinations. (NOTE: I have been directly accused by the Commish of being on court way too often, but this is usually during the warmer months when many are heading toward their chairs more often – no fine ever incurred.)

·         The first team to serve is always on the side closest to the parking lot or the main entrance to the courts – keep it simple.

·         Sets are four games and games are decided by the team which reaches four points first - not based on the 15-30-40 scoring system. A point equals one point. If both teams are tied at 3-all, then it’s time to play the Money Ball – Moose’s version of no-ad play. (NOTE: I have yet to receive a dime for winning the Money Ball point - damn it.)

·         Switching, which can be done after two games, but rarely is, may be prompted by a team for a reason such as blinding sunlight – actually, that’s about the only reason.

·         All other rules of play follow those as established by the USTA or ITF, whichever comes first or last, or whatever. Just kidding - the rules are followed.

·         Lets due to stray balls from adjacent courts are allowed after the point, but never accepted.

·         Sideliners are not allowed to accept bribes in order to overrule (attempt to influence) a bad line call as good.

·         A server can wait for other non-court players to cross behind the baseline, but may neither complain about nor make excuse for same if they chose to serve in light of the fact. This is courtesy as one of these non-court players may be able to retrieve the stray ball the court players are too lazy to collect.

·         Sideliners are allowed to find station anywhere along the fence as long as they are going to shag stray tennis balls. This is a duty of all non-court players. The Commissioner (Adjunct) is usually excluded for one reason or another. Respect for court players takes precedence over non-court players and sideliners, except in most cases.

·         Profanity is prohibited unless directed at one’s self.

·         A player is not allowed to praise an opponent until said player and respective partner have won the game. Not really. There is plenty of opponent-to-opponent praise during a game, but it is usually BS.

·         Pets are allowed along the back fence as long as they are docile by nature or by medication and are house (court) trained. Oh, they have to be cute as well.

·         As hideous as a player’s outfit may be, clothing is definitely required and highly recommended for the visual health of all.

·         Food is allowed on the sidelines, but a player must offer a morsel to at least two adjacent players. No more is required unless it is a holiday and then a player must provide at least one ample serving for a minimum of a half of the players in attendance.

Absenteeism is not a crime nor a penalty as much as it is a self-inflicted wound. You will truly hate yourself and feel ill if you miss a Moose League - East play day or event.For the new Moose…Continue

You need to be a member of Moose League - East to add comments!