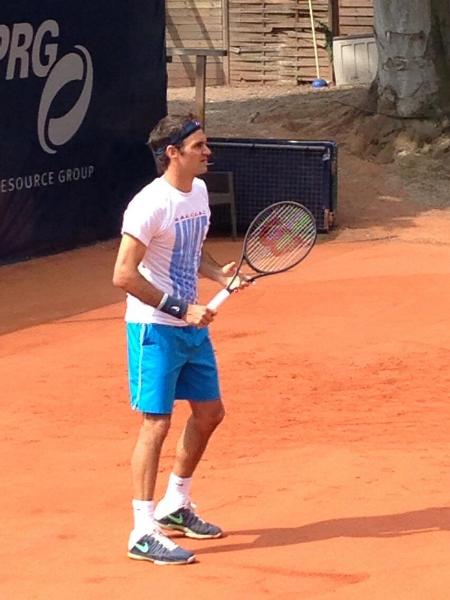 “I think this decision was made very quickly the day after Wimbledon,” Federer told the German press today. “I thought, what are my options now? Do I need more practice? Do I need more matches? What does my heart say? I really wanted to play some more matches.”

Hamburg tournament director and fellow Wimbledon champion Michael Stich did the honors giving Federer, a 4-time champion their, a wildcard to get into the draw.

Federer also pointed out that his decision was influenced by the need for more match play and more confidence. Roger is still playing a reduced schedule but he hasn’t been reaching finals, so he hasn’t been playing as many matches as he’s in prior years.

“Right now I just want to win a lot of matches, hopefully win a couple of tournaments and then sort of build confidence and go from there into the hard courts,” Federer said.

On the court, there’s been much speculation, especially on twitter, that Federer is debuting a new, larger racquet this week in Hamburg. Federer has long used one of the smallest frames on the tour, but as his skills diminish a larger head size could prove beneficial, some suggest.

At Wimbledon Federer was using a mostly white frame, the Wilson BLX 90 ProStaff. In practice at Hamburg the frame he is using is clearly black.

With his family back home, Federer landed Sunday in Hamburg and hit with friend Tommy Haas. Then he reportedly went for a steak dinner and a movie!

The 5th-ranked Federer faces Daniel Brands in the second round on Wednesday. Brands is the German who played Rafael Nadal very tough at the French Open. Next week Roger will return to Switzerland to play in Gstaad.

Thanks, James! Definite confirmation that it is a Wilson prototype and that it is a 98! Incredible change indeed!

Word from Federer himself about his new racquet!

Via Google translation, Federer said: Yes, I have a new racquet. It features a larger clubhead. So far I’ve played with a 90, now I get to a 98th order. I think 90% of the players on the ATP Tour have club head sizes between 95 and 100 Wimbledon since we have now tested this, and so far it’s going great. I can easily develop with the new racquet power. The racquet change is in my opinion one of the largest for a tennis player.

I saw the reasons that it is not one of the commercially available Blades, but there is no doubt in my mind that that frame is made with the same form as a Blade.  It is a very distinctive shape.

Yes, I remember that Mizuno racquet. Lendl didn't seem to be as accurate on his backhand pass with that racquet.

Let's see if Fed sticks to this racquet and if his accuracy suffers. ;)

For the reasons at the bottom of the thread, it cannot be a Wilson Blade 93 or 98. It also cannot be one of Haas' Prestige MP, since that racquet's mains skip at the 8 and 10 holes.

One person believes Wilson is coming out with a new Pro Staff 95 line and this is the prototype.

Reminds me of Lendl in his last years of his career. Switched to Mizno and could not win a Wimbledon title. After that, he switched back and forth between a Mizno racket and GTX Pro-T with a Mizno paint job.

Yeah, it's funny how people will change their racquets because Federer does...I use the BLX 90 and always thought it was a great racquet but makes the game that much harder because of the small hitting surface and the need to be so precise on your hits, so I've been testing the BLX 100 version and I think it makes the game so much easier if you have a slightly off day...

Either way, Wilson is going to suddenly sell a lot of Blades!  I play with the 98 and I love it. I hope Fed stays with this larger racquet and gives it time because I really want to see if his game improves.

This actually looks like the Blade 93, rather than the 98...