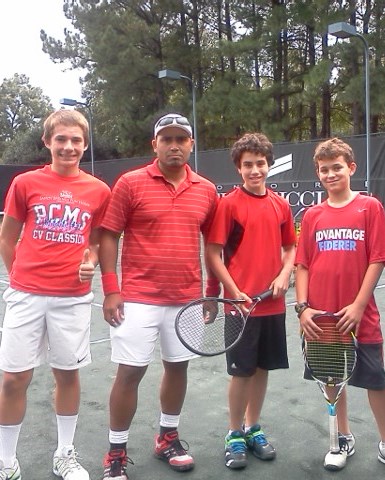 One of my Students comes to tennis last night and it turns out its his 1 year anniversary to an exact date. January 8th. Due to the holidays he was the only kid for the last half hour of training.  So i asked him "do you know that today is ...no.... Its your 1 year anniversary?" the 14Yo boy was like Yaaaa i am one years old.  so i made him an Birthday offer.

V- "do you want to play tennis for 30mins or go eat some pizza.

Alex - I don't have any money for pizza

V - hehe, no I'm buying it for your 1 year birthday present

So we called up his parents, got permission to drive him home and to keep him for pizza.  we ate and watch TV at the club.  When the Pizza was done I drove him home. On the way home we are laughing and telling stories about when he first started playing tennis1 year ago and how we used to celebrated if the ball didn't leave the complex.

We get to his house which isn't too far from the club, parents invite me in.  Alex's parents thanked  me for the work I done with Alex for the last year.  They have been trying to find something he would do and enjoy on his own.  Playing with me they said really changed his life.  "We are so grateful that Alex has found something he likes and has played such a positive role in his life, thank you V."

Alex's confidence grew in himself. He started working out in the GYM on his own, which for his age of 13/14 requires a training certificate because he is too young.  He got into good shape and became the fastest kid in his school in 2012.  He was able to make it to the quarter finals of his first tournament.  Alex is able to play tennis against players that have 3 or more years on him.  Which is great success for a 1 year old tennis player.

Alex's Mom and Dad also joked about the beginning when we first started working with each other.  Alex his very first day hit over half the brute cart of balls (150) over the fence into a parking lot where you cannot get back the balls.  There were days when he would go home saying he suck and he doesn't want to play tennis at all, and why are you making me play.  It took time educating him on tennis this last year. Alex even now has a better understanding now than he did 5 month ago.

Alex however is not a talented player, but he has a special skill of HARD WORK to get better. Private tennis lessons and coming to drills has been a great help to him in the last year in developing timing and hand skills.There has also been opposition as well which he had to work though. Playing & Training at another location with school friends where the coaches singled him out because he works with me.  The other coaches Tease him about his skills, and demand Alex do tennis their way.  They want him to use a Double handed backhand instead of a single, but he cant hit a double. They punish him for using a single with laps, pushups or teasing, which happens after hitting a winner with he single handed backhand.Yes, the coaches are older adults.

Alex is still just playing tennis for fun. Part of the talking to the parents was about, what's the next step for alex.

Alex may be able to position himself for a tennis scholarship in the next 3 year, but he is still playing tennis because its fun.

if you like this story. please join my tennis free tennis coaching group http://tennisopolis.com/group/coachvtopranktennis